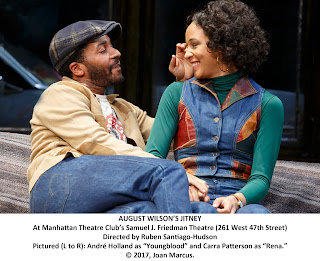 Splendidly acted by a superlative ensemble and finely directed by August Wilson veteran Ruben Santiago-Hudson, this revival of Wilson’s 1982 play, which takes place in the office of an unlicensed car service about to be demolished in 1977 Philadelphia’s Hill District, gets the new year off to a distinguished start.

“Jitney” is, in fact, the only one of Wilson’s American Century Cycle plays not to have been seen on Broadway, and here it is at last, courtesy of MTC which has a solid history co-producing such Wilson plays as “King Hedley II,” Seven Guitars” and “The Piano Lesson.”
“
I recall the original Off-Broadway production fondly, with its roster of fine performances, but the present cast doesn’t disappoint.

Together they form a powerful ensemble, the equal of any on or off Broadway at the moment. The versatile classical actor Thompson is especially compelling as Becker, one of his best roles, but everyone here is at the top of their game.

Wilson’s writing is extraordinary as always, poetic yet so very natural. Conversations always take an unpredictable turn. And although there’s a bittersweet quality throughout, there are some wonderfully humorous bits, such as an amusing exchange about the merits of Lena Horne versus Sarah Vaughan. These flow seamlessly amidst scenes of high drama such as the powerful and poignant reunion of Booster and Becker who, we learn, never came to see his son once in jail, and Doub dispensing pearly wisdom to fellow vet Youngblood: “It ain’t all the time what you want. Sometimes it’s what you need. Black folks always get the two confused.”

Santiago-Hudson knows this material well, and like a masterful orchestral conductor, leads his cast to something close to perfection.

With the beautifully realized film version of “Fences” currently on movie screens, this powerful production offers an ideal complementary experience.