It’s been fascinating to observe how performing arts organizations have presented their works online during this protracted pandemic period. Apart from unearthing archival taped performances, some continue with the by-now rather prosaic Zoom approach; others, like the Irish Repertory Company, have shown great resourcefulness in expanding the boundaries of virtual performance.

Now MasterVoices (the former Collegiate Chorale) has come up with something most decidedly in the latter category, scoring high marks on the creativity scale.

Under the overall supervision of Artistic Director Ted Sperling, they’ve come up with a compelling and artistically outstanding reimagining of Adam Guettel’s 1996 “Myths and Hymns” song cycle, which played the Public Theater in 1998 with the title “Saturn Returns,” and directed by Tina Landau. The piece was written between Guettel’s breakout hit, “Floyd Collins” and the acclaimed “The Light in the Piazza.”

“Myths and Hymns” -- its text largely derived from Greek mythology and a Presbyterian hymnal, -- explores, in Guettel’s words, “a desire to transcend earthly bounds, to bond with something or someone greater.”  MasterVoices will be presenting the works in four “chapters,” the first of which, with its theme of “Flight,” premiered on Wednesday.

The singing is, I think, mostly live except for some outdoor sequences which necessitated lip-syncing. Guettel’s music is dizzyingly complex, but that’s no obstacle for the highly skilled singers assembled here. Don Sebeskky and Jamie Lawrence’s original orchestrations are used.

The 28-minute presentation begins with a jovial welcome from Sperling, and gets off to a lively musical start with virtuoso duo piano team Anderson & Roe on “Prometheus” (nifty camerawork here, as throughout the series).

Then, “Saturn Returns: The Flight” essentially lays out the overarching yearning theme, as Henry sings “I don’t know what I hunger for”

The jazzy “Icarus” follows, with Lewis as a modern-day father cautioning an overly ambitious son (Kilgore). 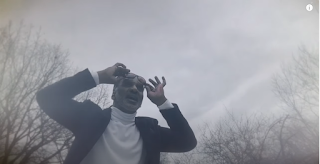 The dreamy “Migratory V” follows with Fleming, O’Hara, and Bullock harmonizing as they marvel heavenward at the wonders of flight observing the birds above.

Original Public Theater cast member Annie Golden narrates the story of Pegasus (Jenkins)  throwing off his rider (Llana, another Public Theater veteran) when bitten by a gadfly (delightfully  goofy Stanley). Guettel himself appears on guitar in the opening moments.

The chapter ends with a wonderfully joyful “Jesus the Mighty Conqueror” (with its resurrection motif) virtuosically vocalized by the Take 6 a capella sextet.

This first chapter of “Myths and Hymns” can be viewed on MasterVoices’ YouTube channel, and also at mastervoices.org.

The stereo sound is superb, and diction is exemplary, though I felt the experience could be enhanced by proper subtitles, as YouTube’s automatically generated captions are not quite complete.

Posted by Harry Forbes at 7:26 AM 0 comments