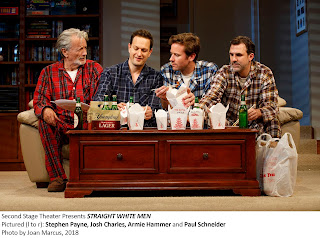 
Widower Ed (Stephen Payne), an engineer, gathers his three grown sons for Christmas, and amidst much sophomoric horseplay and f-bombs, a disturbing family dysfunction emerges. The turning point occurs when son Matt (Paul Schneider) unaccountably starts to cry, as the guys scarf down their Chinese takeout meal.


Matt is a Harvard graduate and a high minded idealist.for whom great things had once been predicted Now he lives at home, a virtual caregiver for his father, and content to work at a menial clerical job for a community group. His brother Drew (Armie Hammer), a successful novelist and teacher, sees in Matt’s inaction a lack of self esteem, and strongly pushes him to therapy. Divorced banker brother Jake (Josh Charles) is certain Matt has eschewed the American dream and has simply decided not to sell himself. Ed, for his part, believes Matt may just troubled by the debt of his student loan.


Such is the premise of Korean-American playwright Young Jean Lee’s play, seen at the Public Theater in 2014.  With its testosterone fueled characters, this might almost be mistaken for a Sam Shepard play were it not for the themes which are uniquely Ms. Lee’s. For gradually, it emerges that all three are troubled by their lifestyles which have come to them through what they’ve been brought up to recognize as white privilege. Their late mother had even invented a Monopoly-like board game called “Privilege” to drive home that point.


Still, when Matt shows indifference to chasing success, his siblings and father, for all their liberal leanings, are deeply displeased. At one point, quite amusingly, Ed and Jake role enact an interview situation so Matt can learn how to market himself, one of Lee’s most cleverly written scenes.


“Straight White Men” does, at times, seem patently didactic, but thanks to the sharp writing, and persuasive performances, you’re absorbed, and though some suspension of disbelief is needed, one accepts these characters as a real family.


Getting the play off to an intentionally off-putting start, patrons enter the theater to the blaring sound of female rap music (sound design by M.L. Dogg) which is mercifully silenced by the entrance of trans performers Kate Bornstein and Ty Defoe who acknowledge the disorienting sounds and set up the premise of the play to follow. Likable as they are, this framing device seems utterly gratuitous.


Anna D. Shapiro directs with a sure hand. Faye Driscoll’s choreography and Schall’s fight direction are tops as these characters are intensely physical.

On a Clear Day You Can See Forever (Irish Repertory Theatre) 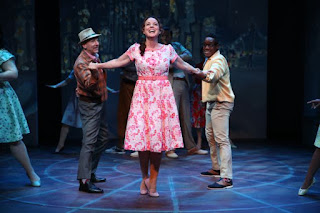 
We can be thankful to Irish Rep Artistic Director Charlotte Moore for bringing us a reasonably faithful revival of Burton Lane and Alan Jay Lerner’s imperfect but worthy 1965 musical -- later a Vincente Minnelli film starring Barbra Streisand -- and helping eradicate the bitter taste of the most recent exceedingly odd 2011 Broadway revival.


Here, the basic storyline, and much of Lerner’s dialogue, remains true to the original. Chain smoking Daisy Gamble (Melissa Errico) is led to psychiatrist Dr. Mark Bruckner (Stephen Bogardus) to cure her chain smoking. Once in his class, however, she proves highly susceptible to hypnosis, and is revealed to possess extraordinary ESP and telekinetic powers. But, more significantly, when she is regressed to childhood, she trips back even further in time to reveal a past life as an 18th century English lady named Melinda Wells. Bruckner falls in love with the earlier incarnation of the lady leading to complications especially when Daisy herself falls for Bruckner.


Despite the formidable presence of Harry Connick, Jr. and Jessie Mueller in the 2011 version, adapter Peter Parnell made some fairly radical alterations, including changing the gender of the heroine to “David,” a gay florist, while the flashback sequences hearkened not to 18th century England but to 1940’s Big Band era USA with Daisy’s earlier self Melinda now a jazz vocalist. Songs from Lane and Lerner’s “Royal Wedding” score were gratuitously interpolated. It just didn’t work.


On this occasion, Moore -- who both directed and adapted Lerner’s original script -- has done some fiddling herself, but nothing half so extreme. A couple of songs and characters have been dropped. Gone is the Greek magnate who wants to leave his fortune to himself and his amusing but expendable song “When I’m Being Born Again” and so is the character of Daisy’s fiance Warren (now merely an ensemble character), and her Olde English pastiche number, “Tosy and Cosh.” only played as background. In the original, Daisy had to give up smoking so as not to compromise her fiance’s job prospects; here, it’s her own.


In place of these numbers, there’s the number that Jack Nicholson was supposed to sing in the film, “Who Is There Among Us Who Knows” (filmed but cut prior to release) done here as an attractive ensemble piece. Joanna Gleason sang Streisand’s movie songs in a 1980 San Francisco revival opposite Robert Goulet who had popularized the show’s title tune on record, but they’re not included here. Those numbers were also utilized in 2011.


Many find the reincarnation aspects of the plot ludicrous, but I’ve always found it rather intriguing, and the whole delightful, dotted as it is with such classic songs as “Come Back to Me,” “What Did I Have That I Don’t Have?” and “Hurry, It’s Lovely Up Here.”


Errico, who brings magic to all her work for the Irish Rep, creates a distinctive Daisy/Melinda, quite unlike originator Barbara Harris or Streisand. Pure New Yawk as Daisy, she’s convincingly the genteel English lady as Melinda. And her singing is splendid as always, clean and pure, with a brassy belt at the climaxes of “Hurry, It’s Lovely Up Here” and her second act showstopper “What Did I have That I Don’t Have?”


Stephen Bogardus is solid enough as Bruckner but I feel fails to spark sufficiently the rather colorless role. He handles his three big numbers with aplomb, however: “Melinda,” “Come Back to Me” (another chart topper in its day), and the title number.


John Cudia brings his strong tenor pipes to the role of Edward Moncrief, Melinda’s philandering husband, and “She Wasn’t You” is a showstopper. Errico sings it, too, as “He Wasn’t You.” (Yves Montand got to sing a variation of the song in the film, but that, too, was cut, and only Streisand’s remains.)


Other textual changes: the lively “On the S.S. Bernard Cohn” has lost its intro referencing her fiance Warren, and Warren’s “Wait Till We’re 65” extolling the virtues of Social Security and so forth, is now sung by Daisy’s friends as they persuade her to take a stable job.


The ensemble of five musicians, under the direction of Gary Adler, provides a pretty if intimate orchestral palette in Josh Clayton’s new orchestrations. Barry McNabb has provided the nice choreography for the intimate space, most elaborately in the “Wait Till We’re 65” number.


The strong-voiced ensemble does outstanding work throughout, and gives good measure to the title song on the theater’s balcony steps. 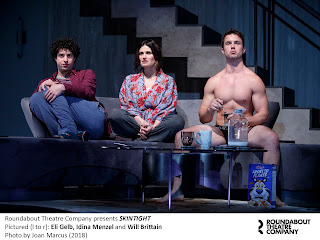 
That always-rewarding playwright Joshua Harmon has come up with a generally amusing comedy (albeit with serious undertones) about an unhappy 40-something divorcee who pays a surprise (and unwanted) visit to her gay fashion-designer father on the occasion of his 70th birthday. “It’s not an achievement to not die,” her father observes sardonically.

Idina Menzel, in a rare departure from musicals, is terrific as the self-absorbed, one minute loving, the next spiteful, daughter who arrives a bundle of raw nerves as her ex-husband is poised to marry a vapid 24-year-old. Her comic timing is really fabulous throughout.

Her distant father Elliot (Jack Wetherall) has a 20-year-old lover Trey (Will Brittain), the latest in a string of boyfriends, but this one may be more real than the others, as Trey resolutely identifies himself as Elliot’s “partner.” Adding to the mix is the imminent arrival of Jodi’s lackadaisical 20-year-old son Ben (Eli Gelb), who happens to be gay, and is on leave from a summer in Budapest majoring in Queer Studies, while exploring the Jewish family tree. (Elliot’s parents had fled Hungary during the Holocaust.)

Completing the unorthodox household are Orsolya (Cynthia Mace), a Hungarian maid who seems to have an unlikely bond with Trey, and a servant Jeff (Stephen Carrasco) who says little and is treated with arrogant disdain by Trey.

Harmon’s play, generally quite entertaining, doesn’t quite seem to me on the level of “Significant Others” or last season’s “Admissions,” but it's still quite worthy.  Part of the problem is that the characters here, though all demonstrating some good traits, unpleasantly veer towards the sour. But the basic setup is intriguing, and it's especially amusing to watch Jodi’s reaction to Trey, whom she refuses to accept as a member of the family, though she’s otherwise nonplussed about her father and son’s gayness.

Besides family and the nature of love, Harmon’s main theme is the supremacy of youth and beauty, despite all we’ve been traditionally taught about the inner self being most important.  Elliot effuses dreamily about Trey’s beauty in a late monologue that may strike some as a bit icky, especially when he says he wants to sleep on sheets made from his young lover’s skin. Harmon gets further mileage from several Botox gags.

Elliot is the most buttoned-up character, but Wetherall captures the enigmatic contradictions. The well-buffed Brittain -- who casually parades through the living room in a thong in one scene -- is superficially the dumb boy toy, but his Okie character shows more substance as the play progresses. Gelb is also impressive as Elliot’s more privileged-than-he-admits grandson, and his midnight exchange with Trey on the living room couch is deftly played.

Though Mace and Carrasco have the least to say as the servants, their body language speaks volumes. And Mace’s ascent up the stairs with a heavy suitcase is the most memorable staircase maneuvering since Julie Halston made her hilariously drunken ascent in “You Can’t Take It With You” a few seasons back. In fact, every time a character climbs or descends on those steps, we witness little gems of acting and direction.

Set designer Lauren Helpern has designed a coolly elegant West Village duplex set for Elliot including that tall staircase which we see in side view.

Frequent Harmon collaborator Daniel Aukin (“Bad Jews,” “Admissions”) is finely attuned to the playwright’s rhythms and the quirkiness and contradictions of his characters.

Jess Goldstein’s apt costumes and Pat Collins’ classy lighting are further pluses on the production side.