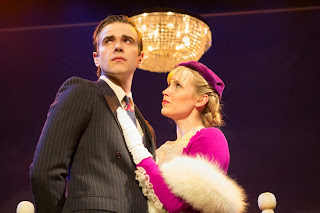 Tom Wojtunik, artistic director of the Astoria Performing Arts Center, is moving on after six years, but he’s going out in high style with an absolutely superb production of Rodgers and Hammerstein’s rarely done 1947 “Allegro.”

The musical was sandwiched between “Carousel” and “South Pacific” in the R&H canon and is often called the first concept musical with its ensemble frequently commenting on the action, Greek chorus-style. The story traces the birth and rise of small town doctor Joseph Taylor, Jr. who allows his wife’s ambition to sway him from the noble course of following in his physician father’s practice and instead to take a position at a Chicago hospital where the shallowness of both the administration and his pampered patients eventually drive him back to his true calling.

Hammerstein’s book may lack irony, as one audience member was overheard to say, but its simple story can be intensely moving when done well, as it is here.

Accompanied by a seven-piece ensemble (playing an excellent scaled-down orchestration) under the direction of Julianne B. Merrill on keyboard, and superbly choreographed by Christine O’Grady, this musical, so reminiscent of “Our Town” in its evocation of small-town Americana, tugs at the heart in all the ways book writer Hammerstein intended.

The principals are all excellent: Andy Lebon and Daniella Dalli as young Joe’s parents; Jean Liuzzi as his grandmother; Crystal Kellogg as small-town girlfriend Jennie; Joshua Stenseth as his college buddy Charlie; and Manna Nichols as his assistant nurse Emily who helps Joe find his true self again.

Lebon and Dalli sing the show’s hit, “A Fellow Needs a Girl,” most tenderly, and Dalli returns near the end with an exquisite rendition of “Come Home.” Nichols has Lisa Kirk’s star-making role, and gets a rousing hand for “The Gentleman is a Dope.” Her character, Emily, has been conflated with college gal Beulah, with whom Joe has a little dalliance, so Nichols gets to sing another of the show’s evergreens, “So Far.”

Though Encores did “Allegro” 20 years ago with a full orchestra, this version has, I think, a fuller (if not complete) book and more integrated approach. O’Grady’s dances really evoke original director/choreographer Agnes DeMille’s style. Whereas DeMille had the luxury of a separate team of dancers, O’Grady’s smaller forces must sing and dance, and they do both remarkably well.

John Chapman, reviewing the original production in the Daily News, found the show to be “An Elaborate Sermon,” but most of the other critics found much to admire. Brooks Atkinson in the New York Times, for one, called it “a musical play of superior quality” and Howard Barnes in the New York Herald Tribune proclaimed it “a show to be remembered with Show Boat and Oklahoma!”

Wojtunik’s production certainly confirms its quality, even though I can’t agree it’s in the exalted ranks of those last named. He utilizes the expansive playing space – a bit like that of Circle in the Square – judiciously, with performers entering from all points, and blocking his cast most attractively. The early maturation of Joe sequence (“One Foot, Other Foot”), and the wedding scene at the end of Act One are beautifully staged, as is the frenetic Chicago sequence (“Yatata, Yatata, Yatata”).

Stephen K. Dobay’s set design keeps to the simple concept of the original production, and Dan Jobbins’ lighting is masterful, creating just the right mood for every moment.

A new production of “Allegro” has been announced for Classic Stage Company this October to be directed by John Doyle, whose “Irma La Douce” was just on the boards at Encores. Wojtunik’s production will be hard to top. 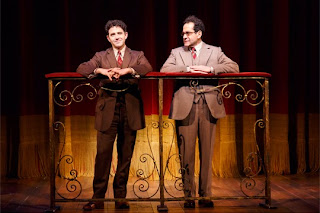 If you love theater, I don’t see how you can fail to be enchanted by James Lapine’s dramatization of playwright/director Moss Hart’s legendary autobiography, “Act One,” which traces Hart’s life from a star-struck kid in a Bronx tenement through his first collaboration with established playwright George S. Kaufman.

The action plays out on Beowulf Boritt’s wondrously versatile revolving set and is splendidly outfitted by Jane Greenwood.

Hart is played superbly by the ever engaging Santino Fontana with Tony Shalhoub as the older Hart looking back on his life, with Matthew Schechter as youngster Hart (also excellent). The incredibly versatile Shalhoub also plays Hart’s father, and Kaufman.

The early interaction between the novice playwright and his mentor – an eccentric germaphobe – is portrayed most entertainingly. And Lapine has succeeded to a remarkable degree in making the creative process, as Hart and Kaufman rewrite their first play together, “Once in a Lifetime,” dramatically viable.

Andrea Martin is marvelous as Hart’s theater-loving Aunt Kate who lived with the family until Hart’s father ordered to leave the house for her intrusive and penny-pinching ways (the play’s most dramatic scene). And she returns, flamboyantly, as Hart’s agent Frieda Fishbein, and then she's the picture of graciousness as Kaufman’s wife Beatrice who eases young Hart into the Kaufman’s exalted circle of friends (i.e. Dorothy Parker, Edna Ferber, etc.).

Most of the other principals – Chuck Cooper, Will LeBow, Mimi Lieber, Bob Stillman, etc. – also perform double or triple duty, without undue confusion for the audience, no small feat.

The play clocks in at nearly three hours, but there’s nary a dull moment with director Lapine’s assured pacing. The result is a far more enriching experience than the Hollywood film – adapted and directed by Dore Schary -- released in 1963 with George Hamilton as Hart and Jason Robards as Kaufman. (It occasionally pops up on TCM.) 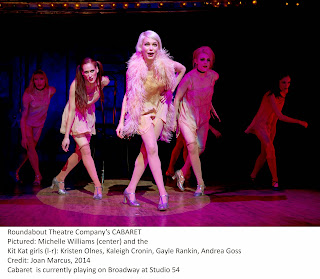 You’ll be forgiven that overpowering sense of déjà vu in watching the meticulous-down-to-the-last-detail resurrection of the 1998 revival of Sam Mendes and Rob Marshall’s hit Roundabout production which, in turn, started life at London’s Donmar Warehouse way back in 1993. The Studio 54 seats are gone replaced by the café tables of yore, and what transpires onstage is, casting aside, a proverbial carbon copy.

As with most of the stage productions done after Bob Fosse’s 1972 Oscar-winning film, the sex quotient of the Kit Kat Klub has been ramped up, and protagonist Clifford Bradshaw is sexually on the fence as Michael York was in the film to more accurately reflect “Berlin Stories” author Christopher Isherwood’s actual persona.

Still, with all the changes, most of the songs from the original score have been retained with a few interpolations from the film and elsewhere.

As landlady Fraulein Schneider and suitor Herr Schultz, a fruit seller, Linda Emond and Danny Burstein are outstanding, both acting and singing. There’s good work, too, from Bill Heck as the sexually ambivalent Cliff, Gayle Rankin as the boarding house hooker Fraulein Kost flaunting her visiting sailors under her landlady’s disapproving gaze, and Aaron Krohn as Cliff’s German friend Ernst Ludwig who, like Kost, shows a sinister side as the evening develops.

The production – choreographed by co-director Rob Marshall and with musical direction by Patrick Vaccariello -- is in tip-top shape.