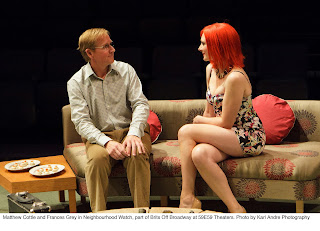 In his 75th play, Alan Ayckbourn shows that he is still very much at the top of his game (though when has that not been the case?), and “Neighborhood Watch,” direct from Ayckbourn’s home base, the Stephen Joseph Theatre in Scarborough, England, features his usual exemplary ensemble of actors that have you marveling at the absolute perfection of each characterization.

A large part of the pleasure derived from Ayckbourn’s plays is the skill with which he orchestrates each new development, but on this occasion, the play does open with a long speech in which the the middle-aged Hilda (Alexandra Mathie) eulogizes her beloved brother Martin who, we gather, has been killed “tragically and prematurely.” That much we know. The rest of the play a flashback.

We see how said Martin (Matthew Cottle) and Hilda have taken up residence at the Bluebell Hill Development and are relishing their anticipated carefree suburban existence. But a young trespasser climbs over their fence just as they are preparing for a housewarming party. Their first guests – the ex-security guard and sometime vigilante Rod (Terence Booth) and the gossipy Dorothy (Eileen Battye) – convince them there’s danger everywhere.

Rod, in particular, warns that the lower class folk in the estate houses at the bottom of the hill are a bad lot, and Martin and Hilda had better put a strong fence, topped with barbed wire, around their house if they know what’s good for them.

Martin is sufficiently galvanized by Rod’s alarmist talk to form the titular neighborhood watch, one which carries increasingly fascistic overtones. If the police won’t adequately protect them, as Rod has demonstrated in his cautionary tale about how his hedge trimmer once went missing, they'll do it themselves. Before long, we see that there can be just as much danger within their gated community as outside.

A dark undercurrent imbues the play, with Ayckbourn taking every opportunity to satirize right-wing, sanctimonious folks whose fear and paranoia are far more destructive than whatever they perceive as the enemy. Hilda and Martin are devout Christians, but Ayckbourn takes sharp aim at the hypocrisy beneath the good intentions. The character with the least hang-ups – the amoral Amy – is the one who most earns our sympathy.

The cast, as noted, is truly brilliant. Each brings one of Ayckbourn’s masterful character studies to vivid life. They exemplify the best of the British school of acting, with Mathie especially impressive as the sweet but, as we gradually come to see, scarily controlling sister.

Set designer Pip Leckenby’s cannily placed pair of crescent-shaped sofas, with three perfectly positioned throw pillows, makes the apt living room centerpiece, even without having to show us the dreadfully green wallpaper which Hilda has proudly covered the walls.

Under Ayckbourn’s own direction, every funny barb, delicious nuance and ominous utterance lands just as it should.