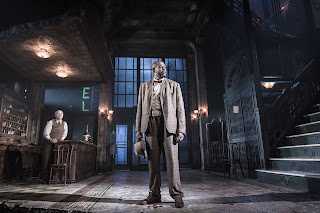 When film star Forest Whitaker was first announced to star in a Broadway revival of Eugene O’Neill’s very brief one-act play first written in 1942 (but not produced in America until 1964 with Jason Robards, Jr.), one had every reason to imagine the play, which runs only a bit shy of 60 minutes, was perhaps one of the actor’s personal favorites or at least one with which he felt a particular affinity.

But after watching the amiable but uncertain performance on view at the Booth, one is simply left with a major “why?”

One need only listen to a few minutes of Robards’ 1964 premiere performance, or a later audio version from the 1990s with his voice considerably older to hear all the character authenticity and innate sense of O’Neill’s rhythms missing in Whitaker’s assumption of the role.

The setting is a gloomy hotel lobby – beautifully realized by designed Christopher Oram (who also crafted the period costumes) – and the time is 1928. Erie Smith (Whitaker), a small time gambler ambles into the lobby after his latest drunken binge, and proceeds to bend the ear of the mild-mannered night clerk (Frank Wood) whose surname Hughes resembles that of the titular Hughie, the late former clerk on whom Erie pins the success of his early days, and sets him bemoaning the turn in his fortune’s since Hughie’s demise.

The play is basically a monologue, interspersed with characterful responses from the clerk. There have been uncharitable reports of Whitaker’s difficulty memorizing his lines and the presence of an off-stage prompter, and indeed I detected spurts of hesitancy in his delivery, but mainly it’s his failure to create a plausible character that’s the major flaw. The failure is all the more puzzling since he’s very much at the top of his game on the screen. He was superb in last year’s “Southpaw” with Jake Gyllanhall, for instance.

Brian Dennehy, another O’Neill veteran, was said to have been wonderful as Erie. And one can imagine other “Iceman Cometh” alum such as Nathan Lane and Kevin Spacey would do well.

Posted by Harry Forbes at 8:54 AM 0 comments

Fiddler on the Roof (Broadway Theatre) 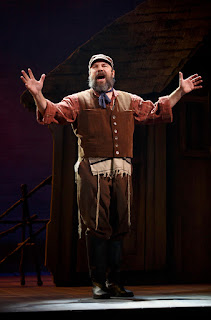 The framing device that opens and ends the show – a contemporary man (not sure if he’s meant to be a tourist, researcher, or descendant) taking stock of the Russian town that was once the Anatevka shtetl, before he morphs into the Tevye of 1905 – seems a gratuitous addition, but those sequences are brief, and scarcely spoil the traditional whole. And the final tableau of displaced refugees can’t help but conjure powerful contemporary parallels.

Tevye – the iconic impoverished milkman originated on Broadway by the larger-than-life Zero Mostel, and the also larger-than-life Topol in London (and later on film) – is taken here by Danny Burstein, not, one might have thought, a natural-born Tevye. Yet he brilliantly excels in this leading role for which his outstanding succession of supporting parts have clearly prepared him.

The casting is generally well chosen across the board. Jessica Hecht, albeit with a rather peculiar accent, is his gruff but loving wife Golde, Alix Korey the meddling matchmaker Yente, and Adam Dannheisser Lazar the butcher who hopes to marry the eldest of Tevye’s five daughters Tzeitel (Alexandra Silber).

But, as we all remember, Tzeitel loves Motel (Adam Kantor), the poor but ever-optimistic tailor. Daughter Hodel (Samantha Massell) falls for Perchik (Ben Rappaport), the girls’ firebrand tutor, and bookish Chava (Melanie Moore) has the audacity to fall for the Christian Fyedka (Nick Rehberger).

Michael Yeargan’s settings are elegantly spare, sometimes hovering about the stage (like the titular fiddler), while Catherine Zuber’s evocative costumes are all they should be. Donald Holder’s lighting sustains the mood and ambiance.

One is reminded again of the many strengths of Joseph Stein’s book – which deftly mixes the humorous and the profound -- showing the old traditions giving way to the new, with the neat symmetry of the three older daughters exemplifying that cultural shift, all against the backdrop of the ongoing threat from the town’s Russian oppressors.

The paean to “Tradition” is, of course, one of several standards to have emerged from Bock and Harnick’s evergreen score, along with “If I Were a Rich Man,” “Sunrise, Sunset,” “Anatevka,” and “To Life.” Sher sees to it that they are acted to the hilt. “Matchmaker, Matchmaker,” for instance, begins with a tearful Tzeitel – who fears she’ll never be able to marry her dear Motel – being ever so gradually uplifted by her sisters with the upbeat song.

Israeli choreographer Hofesh Shechter has designed some very fine dancing – inspired, of course, by the classic Jerome Robbins’ originals – with the wedding bottle dance quite spectacular as before, and mining all the requisite laughs from Tevye’s Dream ballet.