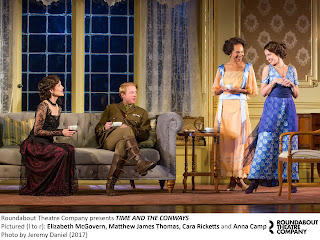 
This is a worthy if not truly inspired revival of J.B. Priestley’s highly intriguing 1937 play about the bourgeoisie in England between the wars, class distinction, and the nature of time.


Elizabeth McGovern, fresh from her “Downton Abbey” fame, stars as the widowed matriarch of a family of four daughters and two sons. But she is far from the sweetly compassionate Countess of Grantham on the popular PBS series. And though she played a expatriate American in that series, here she’s playing it quite English.


The play opens in 1919 on the 21st birthday celebration of daughter Kay (Charlotte Parry). The family is in a festive frenzy over the off-stage pantomime they are putting on for their guests. There are Kay's sisters: lovely young Carol (a radiant Anna Baryshnikov), glamorous Hazel (Anna Camp), budding socialist Madge (Brooke Bloom), and two brothers, the unassuming Alan (Gabriel Ebert) and, just back from the war, the callous ladies man Robin (Matthew James Thomas), the apple of Mrs. Conway’s eye.


But then the set recedes (excellent stage effect by Neil Patel), and another descends from the flies. It’s now 1937, and we see the same characters in quite a different light. This time, acrimony and unhappiness are the pervasive moods.


After intermission, we’re back in 1919, and now with the knowledge of what is to come, we observe evens quite differently.


Priestley, heavily influenced by the work of philosopher John William Dunne on the subject of time, takes the point that the past, present, and future are one, and it is important to see all periods as part and parcel of the present. This theory is articulated by Alan to his prescient sister Kay, a budding novelist in the first scene, later a working journalist who has compromised her youthful ideals. Good times and misfortune can co-exist. “Man was made for joy and woe,” says Alan, quoting Blake. Even young Carol remarks in the first scene that she sometimes thinks of tragic moments when she is in the midst of a happy occasion.


Paloma Young’s costumes are stylishly period, though the limitations of the American Airlines Theatre seem to force a rather flat scenic perspective, despite Patel’s accomplished work. “Indecent” Tony winner Rebecca Taichman’s mostly knowledgeable and sensitive direction (she helmed a prior production at the Old Globe) sometimes, I feel, misses the mark here.


In a pivotal scene of thwarted romance involving Madge and Gerald, for instance, Bloom has been allowed to play her girlish enthusiasm far too stridently, so much so that we’re not allowed to feel the terrible regret of her lost opportunity. We’re rather relieved when Gerald gets away from her. Similarly, the poignancy of another romance (between Alan and Joan) tragically derailed by an intrusive Robin is missing as Thomas plays the scene far too benignly with little hint of his predatory nature.


As stated, Mrs. Conway is far from a model mother, but the audience brings such affection for McGovern, they sometimes seem too much in her corner, laughing and applauding her actions, even when her character is behaving most unfeelingly.


As often the case with these very British plays, an American cast doesn’t always capture the authentic cadence as well as an English cast might, but generally they do well. To see a more idiomatic performance, I recommend an outstanding 1985 British production currently available on YouTube, with Claire Bloom as the mother, and a young Phyllis Logan (Mrs. Hughes on “Downton Abbey”) as Kay.


Though all the performances here are attractive and skillful, ultimately it’s the men who come off best. Boyer is truly superb at Ernest (ill-at-ease in the early scenes, and brutally hard in the second). Ebert tremendously appealing at Alan, and Thomas a convincing wastrel.


This highly stylized adaptation of Anthony Burgess’ 1962 dystopian novel (later made into a famous film by Stanley Kubrick) comes to New York by way of London. As did several previous stage versions, including one written by Burgess himself, this one utilizes quite a bit of music, here almost wall-to-wall synthesized rock.


Director Alexandra Spencer-Jones’ production -- with an all-male cast of nine (from both sides of the Atlantic)  and choreographed within an inch of its life -- has a strong homoerotic feel above and beyond the buffed torsos on display (especially Jonno Davies as Alex, ringleader of a group of teenage thugs called, in Burgess’ Anglo-Russian Nadsat patois,  Droogs -- Dim (Sean Patrick Higgins), Georgie (Matt Doyle), and Pete (Misha Osherovich) among them). (Amusingly, the men’s room line snaked out for miles, while the women breezed into theirs with nary a wait.)


The intermission-less 90 minute production follows the basic outline of Burgess’ novel, as the gang terrorize and rape innocent people, both on the street and in their homes, a murder finally landing Alex in prison where another lethal act of violence leads to him submitting to aversion therapy designed to make violence repugnant to him, underscoring Burgess’ conundrum about the the morality of removing free will. After a suicide attempt, the reconditioning wears off, and unlike Kubrick’s film, the play ends with Alex’s final reformation, the portion originally dropped from American editions of the novel.


As with the recent stage adaptation of “1984,” you’d do well to read a synopsis beforehand, if you don’t know or have forgotten the story. The stylized staging and the cast playing multiple roles -- male and female, but hard to tell the difference -- often makes the plot turns difficult to follow. Timothy Sekk doubles as Alex’s parole offer and the prison chaplain. Brian Lee Huynh is the principal doctor of Alex’s behavior modification and also, earlier on, one of Alex’s unlucky victims. And so on.


The musical soundtrack accompanying all the onstage “ultraviolence” (as Burgess described it, coining a new word) is a highly amplified combination of original music by Glenn Gregory and Berenice Scott, Beethoven (that composer being the surprising favorite of the otherwise uncouth Alex), and others. So, too, there are some glaring lighting effects (James Baggaley) contributing to an overall assault on the senses. There were, in fact, a few walkouts at my performance, but a standing ovation at the end.


The relentless violence (sexual and otherwise) eventually grows wearying and loses its shock value. One doesn’t feel much, if any, emotional involvement in the action. But the tireless Davies gives an undeniably dynamic and highly committed performance, while also serving as fight captain. For all the non-stop dancing, sometimes suggestive of “West Side Story” to a rock beat, there’s no choreography credit per se, but cast member Aleksander Varadian is dance captain.


Photo: Caitlin McNaney
Posted by Harry Forbes at 6:57 AM 0 comments