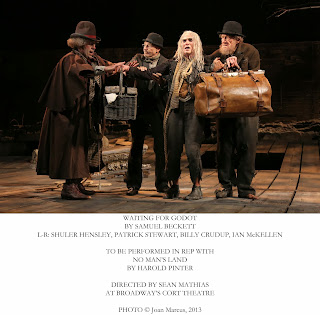 When Patrick Stewart and Ian McKellen – and their estimable cast-mates -- take their curtain calls at the end of Samuel Beckett’s iconic play, they do a little vaudeville turn aptly epitomizing the playful interplay they’ve demonstrated so brilliantly all evening.

Even with the fine Roundabout revival with Nathan Lane and Bill Irwin fresh in mind, Sean Mathias’ production is quite the best I’ve seen, with McKellen and Stewart alive to every nuance in Beckett’s existential text.

It’s a pleasure to watch the sparring – and essential codependency -- between the intellectual Vladimir (Stewart) and the more spontaneous Estragon (McKellen), as these two tramps eke out their daily existence. The audience feels their affection for each other, and when they make up after a squabble, coos and applauds in approval. (This pair is seriously cute!) Their antics almost cross the line of how far to take the comic aspects of Beckett’s text, but these two pros ultimately strike just the right balance.

The extended hat exchanging sequence and their impersonations of haughty Pozzo and his nearly mute (except for one lengthy outburst) slave Lucky in the second act certainly give them the legitimate opportunity for some horseplay.

It must be said that the lengthy Pozzo-Lucky sequence in the first act does try an audience’s patience, despite the credible work of Shuler Hensley (with Southern accent) and Billy Crudup respectively, and there were some walkouts at halftime at my performance. But the second act is utterly absorbing, and you have the satisfaction of seeing two knights of the realm at the top of their considerable game.

And the play, for all its obliqueness, does set us thinking of our life on earth in profound ways, and Mathias’ direction gives clarity to much that is obscure in the text. 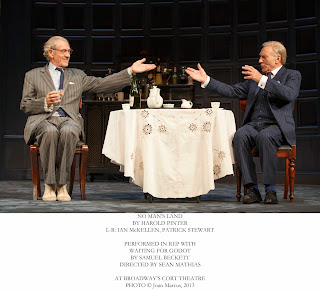 It’s great fun to see the cast in a completely different guise when they take on Harold Pinter’s enigmatic “No Man’s Land,” a far more satisfying Pinter staging than the current “Betrayal.”

Though McKellen and Stewart can’t, in all honesty, be said to match John Gielgud and Ralph Richardson in the original, they are pretty fabulous in their own terms. Stewart’s wealthy literary man Hirst who’s brought home a freeloading character named Spooner (McKellen) whom he’s met on Hampstead Heath. Hirst spends most of the first act in an inebriated haze while Spooner – who claims to be a poet of repute himself – rambles on and on while he consumes great quantities of his host’s liquor. But Spooner soon realizes they’re not alone; Hirst is attended by two shady characters, the sinister Foster (Billy Crudup in particularly good form here) and the hulking Briggs (Shuler Hensley). And, by the second act, Spooner has rather lost the emotional control he had in the first.

Pinter’s constructed a glorious game of cat and mouse, and it’s finely played by all, though perhaps missing just a touch of the requisite menace I recall from the original and a revival a few years ago with Michael Gambon and David Bradley in London.

Posted by Harry Forbes at 5:20 AM 0 comments