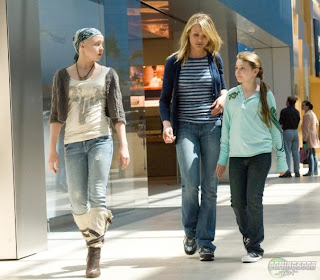 The moral issues of "My Sister's Keeper" (New Line) are laid out for us even before the opening credits have finished rolling.

Narrator 11-year-old Anna (Abigail Breslin) explains that she was genetically engineered, created by her parents, Sara (Cameron Diaz) and Brian (Jason Patric), to provide an exact genetic match for her older sister, who, as a toddler, was diagnosed with leukemia.

In her opening voice-over monologue over onscreen visuals of the galaxy and a microscopic view of fertilization, Anna discourses on the "coincidence" of birth as souls hover in the universe waiting to enter a body below.

Once past this morally puzzling opener, the film -- adapted from Jodi Picoult's best-seller -- proves a generally well-acted if sometimes soggy family drama. It should appeal to those who wept happily over movies like "Terms of Endearment" and "Beaches." Others may find it heavy going.

Devoted but strong-willed mother Sara is in serious denial about teenage daughter Kate's (Sofia Vassilieva) losing battle with cancer, and as one of the girl's kidneys is failing, she assumes Anna will supply the transplant. But after years of blood transfusions and bone marrow transplants (since she was 5), Anna has had enough.

Alexander, like all the characters here, has some issues of his own, though the reason for a service dog's presence is not revealed till late in the film. There's also a passing reference to his having once been involved in a case against the church.

Firefighter dad Brian and older brother Jesse (Evan Ellingson), who suffers from more maternal neglect than Anna, are powerless to fight Sara's single-minded determination.
When Sara -- a former lawyer -- discovers her daughter's obstinacy, she goes ballistic and represents herself in court against Alexander. The case is presided over by a judge (Joan Cusack) who is herself emotionally fragile after her young daughter's recent death in a car crash.

The story flips back and forth in time, with some awkward transitions, though as we learn more of the back story we come to a greater understanding of the family dynamic and the factors that have driven Sara.

During Kate's chemo treatments, for instance, we observe a sweet love affair between the girl and fellow patient Taylor (Thomas Dekker), though the puppy-love affair turns physical at one point. Sara registers appropriate indignation when she learns of the encounter.

Diaz is excellent in a not-always-likable part. Her love for her ailing daughter is never in doubt, but it comes at the expense of her other children and husband. Breslin gets co-star billing, and she's fine as always, but Vassilieva does the heavy lifting as the suffering but wise big sister.

The sad story can't help but be affecting despite basic plot contrivances that would be more at home on a Lifetime television movie. One can't quite believe that such loving, intelligent parents would so heartlessly "create" another child to mine her for body parts. Nor having done so, and the girl being such a beloved part of the family, that they would continue to risk her well-being.

The genetic engineering provides the story hook and provocative food for thought on the ethical issues involved. It also should be noted that the ending of co-writer (with Jeremy Leven) and director Nick Cassavetes' tear-jerker is radically different than that of the book.
Posted by Harry Forbes at 10:46 AM 0 comments