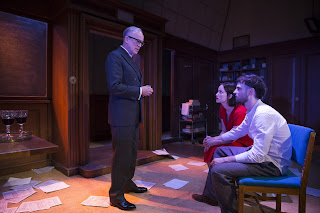 With so many speaking of “1984” parallels in today’s political landscape, here’s an austere, high-tech dramatization of George Orwell’s 1949 novel about a totalitarian, dystopian future.

It comes to Broadway after runs at London’s Almeida and The Playhouse Theatres.

Tom Sturridge, recently such a fine Henry VI in the Shakespeare series, “The Hollow Crown” on PBS, and last on Broadway in the 2013 revival of “Orphans,” in a performance which earned him a Tony nomination, gives an admirably intense performance as Winston Smith, the rebellious Ministry of Truth worker eventually brainwashed and tortured to be in line with the beliefs of the Party and the unseen Big Brother. He uses a flawless American accent to match his castmates.

Olivia Wilde is also excellent as Julia, the Anti-Sex League worker, whom Winston initially fears is spying on him, but with whom he then engages in a passionate, forbidden affair in the backroom on an antiques shop offered to them by Charrington (Michael Potts). But little do they know that their love-making is being captured on the giant telescreens run by the Party.

Strobe lights and jarring sounds abound, while giant monitors broadcast the considerable offstage action, as when Winston and Julia have their trysts in the backrooms. (The scenic design is by Chloe Lamford, video design by Tim Reid, sound by Tom Gibbons, and lighting by Natasha Chivers.)

The presentational style here makes it rather difficult to empathize with Winston’s plight, though Sturridge certainly cuts a pathetic figure as he’s subjected to all manner of torture.

Reed Birney is chilling as  the seemingly mild-mannered O’Brien who turns out to be a ruthless agent of the inner Party and Winston’s harsh interrogator.

There’s good work too from the other cast members including Wayne Duvall, Carl Hendrick Louis, Nick Mills, and Cara Seymour.

The adaptation, which covers the broad strokes of the novel’s plot, is the work of Robert Icke and Duncan MacMillan who also direct, and plays for 101 intermission-less minutes. If you haven’t read the book in a while, you may find the narrative a bit difficult to follow (as I must confess, I did) given the stylized presentation.

Be warned, the violence is fairly graphic, with plenty of stage blood and such, no doubt the principal reason children under 13 are not admitted, but theatergoers with a hardy constitution will find the production an absorbing and intense  if sobering experience. 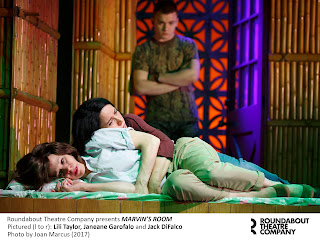 Lili Taylor is wonderfully believable and endearing as Bessie, a good Samaritan taking care of her long-term ailing father (offstage) who has been incapacitated by a stroke for the past 20 years in Florida. But overall, this is a worthy but rather muted revival of Scott McPherson’s 1990 play (later a high-profile movie with Meryl Streep) which has never played on Broadway.

McPherson died of AIDS two years after the play was first done, and though there’s plenty of humor here, the tone is bittersweet.

Janeane Garofalo is Lee, the sister who abjured the caregiving responsibility of both their father (the titular Marvin) and their aunt soap opera-addicted Ruth (very likeable and underplayed Celia Weston) to her sister. But when Bessie is diagnosed with leukemia.

Lee shows up with her troubled teenage son Hank (sympathetic Jack DeFalco) -- who once set fire to their house and is now institutionalized -- and sweet younger brother Charlie (nicely played by Luca Padovan). One of them may be a bone marrow match for Bessie. Garofalo and Taylor do seem plausible sisters, but I think Garofalo needs to give Lee more of an edge.

Triney Sandoval has some funny moments in the rather caricatured role of an alarmingly absent-minded doctor at the roach-infested clinic where Bessie goes for treatment, and there’s capable work from Carman Lacivita as both the offstage voice of Marvin and Dr. Wally’s brother, and Nedra McClyde as two of the medical professionals encountered by Bessie.

Anne Kauffman directs her cast in too low-keyed naturalistic style that not only robs the play of tension, and causes some audibility problems, too. The dialogue is, at times, just too conversational.

At times, the pace tends to drag, though perhaps it’s mostly a case of the stage being too darned big for such an intimate drama, and Laura Jellinek’s panoramic glass brick set (lighted by Japhy Weideman) doesn’t help encourage more focus.

Despite the production’s flaws, the play’s themes of unequivocal love and selfless caring remain touching.