Into the Woods (The Public Theater) 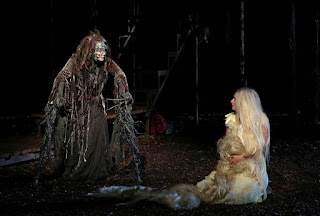 Donna Murphy adds another memorable feather to her Sondheim cap with her dynamic portrayal of the Witch in Stephen Sondheim and James Lapine’s “Into the Woods” ideally set in the sylvan setting of Central Park, as was the Public’s last woodsy offering, “As You Like It.”

This production, directed by Timothy Sheader (with co-direction by Liam Steel) and designed by John Lee Beatty and Soutra Gilmour, hails from Regent’s Park in London, the first such import, but with an American cast. And it’s a talented one, to be sure.

There’s film star Amy Adams as the Baker’s Wife, Denis O’Hare as the Baker, Chip Zien (the original Baker) as the Mysterious Man, Jessie Mueller, late of “On a Clear Day,” as Cinderella, and Ivan Hernandez as the Wolf and Cinderella’s Prince.

All of them have their moments, though it’s Murphy’s assumption of the role that sets this production apart. She’s in strong voice throughout, and uses it to powerful effect throughout from her opening rap song to “Children Will Listen.” Adams is another plus, handling her songs well, though her tall wig is distracting.

The setting and costumes (by Emily Rebholz) are not always in the conventional fairy tale mode. Cinderella and the Princes are traditionally outfitted, but much of the rest is contemporary with Little Red Riding Hood, for instance, wearing a red biker helmet, John Lee Beatty and Soutra Gilmour‘s set, decked out with stairs and platforms, suggests a Disney or Universal theme park exhibit, as the observant young lady next to me noted to her friend as soon as they took their seats.

There’s no denying Jack’s beanstalk and the giant (voiced by Glenn Close) are cleverly done, but the overall physical look undermines the magic. And the staging underscores perhaps a bit too heavily Sondheim and Lapine’s themes of life, death, loneliness, loss, and so on. Lapine’s original staging, and its variants in London and on tour, as well as the last Broadway revival (also directed by Lapine) with Vanessa Williams in all had more consistently strong casts, and were more persuasive overall.

In Sheader‘s concept, the story is told, not by the usual adult narrator (like John McMartin who did the last Broadway revival), but by a child who’s run away from home, and conjures up these characters as he’s working out his own issues. It’s not a bad idea, and Noah Radcliffe (alternating with Jack Broderick) played him competently, but the conceit feels more than a little forced.

For all that’s quirky about this production, it’s still an enjoyable, crowd-pleasing show, and, of course, the price is more than right.

(The Delacorte, Central Park, free tickets distributed on the day of the show, and through a Virtual Ticketing lottery, www.shakespeareinthepark.org; through September 1)

Bring It On the Musical (St. James Theatre) 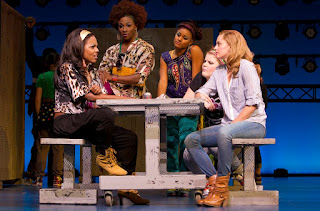 This latest film-to-musical adaptation, one “inspired by” the 2000 film of the same name, concerns a vivacious high school cheerleading captain who, just on the brink of her team winning the championship, finds herself transferred to an inner-city high school after a sudden redistricting by the school board.

This may sound like a singularly uninteresting start for a show.

But, in fact, in the hands of Jeff Whitty (book), Tom Kitt and Lin-Manuel Miranda (music), and Amanda Green and Miranda (lyrics), “Bring It On” is bright, funny, and refreshingly different than almost anything else on the boards.

Part of that difference is the display of Olympic-worthy acrobatics, but even without the somersaults and high flying and flipping stunts, the story engages, and I never sensed audience interest wavering. Furthermore, the underlying themes of friendship and good sportsmanship never turn sappy. Director/choreographer Andy Blankenbuehler maintains a good pace, with all the athletic movement and dancing well integrated.

Taylor Louderman is Campbell the cheerleader who finds herself out of her league in the mostly black Jackson High and she’s an appealing protagonist even as her character’s motivation unpleasantly turns into something akin to revenge. Her sidekick and fellow transferee, the hefty Bridget (Ryann Redmond), an outcast at their former Truman H.S. but warmly embraced by the cool kids at Jackson where her motley outfits register as the ultimate in hip, is played most winningly by Ryann Redmond.

Adrienne Warren is terrific as Danielle, leader of the crew at Jackson, who warily becomes friendly with Campbell, and Ariana DeBose and Gregory Haney are very funny as her fellow crew members Nautica and cross-dressing LaCienega. As you might expect, Campbell eventually convinces the crew to transform into a cheerleading squad.

Kate Rockwell has some good zingers as the bitchy Skylar and Elle McLemore channels Kristen Chenoweth as the ambitious Eva, though in fairness, maybe it’s just that sort of role.

Neil Haskell as Campbell’s wimpy boyfriend at Turner, and Jason Gotay as her new beau at Jackson are fine, but the latter’s character is rather weakly drawn.

The songs do what they need to do to advance the plot, and admirably, it’s not all loud and hard-driving as you might expect. Along with the upbeat numbers, there are some very pretty ballads starting with Campbell’s “One Perfect Moment” and there’s a particularly catchy and funny number in the second act, “It Ain’t No Thing.”