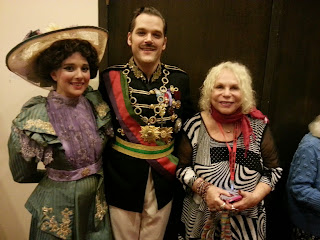 Lovers of operetta and musicals had the rare opportunity for a week-long wallow in their favorite sport during the Ohio Light Opera’s first-ever symposium -- “Taking Light Opera Seriously” -- which, in the event, proved a serious (yes), but also most entertaining and absorbing, examination of the genre from a number of interesting perspectives.

Ayn Rand Institute founder Michael Berliner, for instance, spoke about how operetta saved the "sense of life" of “The Fountainhead” author; Operetta Research Center Director Dr. Kevin Clarke discoursed on cross-dressing in operetta and, later, on the four distinct stages of composer Emmerich Kalman’s career; Stefan Frey, author of a newly translated biography of Kalman, gave a talk on the business side of global operetta; prolific author and historian Kurt Ganzl delineated the various forms of the genre (e.g. opera comique, opera bouffe, and so on) and traced its evolution; and Operetta Foundation President Michael Miller put together a presentation on musical “borrowings,” accidental or intentional, with prime examples from the likes of Sigmund Romberg and Andrew Lloyd Webber. These talks were accompanied by PowerPoint visuals and, where applicable, audio and visual examples. 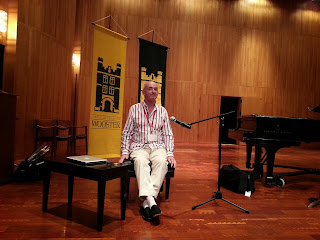 Though the title of the symposium was accurate enough – for these were solidly grounded scholarly talks by distinguished speakers – there was no lack of humor throughout the four days.

Miller (chair of OLO’s board) and his wife Nan were, in fact, the driving forces behind the savvily paced symposium, and laid out the four days with the precision of military strategists – including three outstanding recitals -- before, during, and after the actual OLO performances.

And what a splendidly diverse array of shows the company itself presented: “Call Me Madam” and “My Fair Lady” from the “modern” Broadway period; Jerome Kern’s delightful 1918 Princess Theater show, “Oh, Lady! Lady!”; the Gilbert & Sullivan staple “The Pirates of Penzance”; the Johann Strauss warhorse “Die Fledermaus”; and the two works that alone would have made the pilgrimage to Wooster worthwhile: Victor Herbert’s 1906 musical burlesque, “Dream City” (coupled with “The Magic Knight”); and Emmerich Kalman’s 1912 romantic operetta “The Little King” (“Die kleine Konig”).

Several of the symposium talks tied directly into the performances at hand which greatly enhanced the shows which immediately followed. Ganzl, for one, explained the out-of-the box casting which made the original Gilbert & Sullivan productions, including “Pirates,” so successful; Frey held forth on “The Little King” accompanied by witty visuals; writer and conductor Steven Ledbetter lectured on Herbert’s musical pedigree and the genesis of “Dream City”; and ace musical theater historian Richard Norton gave illuminating talks on the fascinating backgrounds of “Call Me Madam” and “My Fair Lady.” 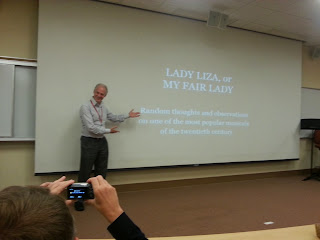 The first and last sessions allowed the presenters to opine on the works they’d most like to see performed, and all-time most impressive musical performers. “La Fille de Madame Angot” (Lecocq), “The Girls of Gottenberg” (Monckton), “The Serenade” (Herbert), and “Love Life” (Weill) were among the former. Elaine Paige in “Evita,” Julia MacKenzie in “On the Twentieth Century,” Christopher Plummer in “Cyrano” were among the memorable latter.

There was an abundance of interesting facts and thought-provoking opinion. Ledbetter declared Herbert the operetta composer with the greatest range. Ganzl impishly debunked the perception of “Show Boat” as the great groundbreaker of Broadway musicals, pointing out that many works before it were just as innovative. Clarke convincingly argued that Offenbach’s “L’Ile de Tulipatan” might be seen as the first operetta about same-sex marriage. Frey colorfully described a heated melee over Merry Widow hats at a promotional giveaway during the run of the first New York production. Miller expounded on the protracted copyright infringement suit against Cole Porter brought by one Ira Arnstein. Berliner recounted how, as a young girl in Russia, Ayn Rand would walk miles, and wait on line for hours to secure one of a cheap balcony seat to the operetta. Norton demonstrated how much the pre-Broadway runs of “Call Me Madam” and “My Fair Lady” differed from their ultimate versions. And so it went.


The three recitals were top notch. “Songs from the Cutting Room Floor” gave an airing to the excised numbers from “Call Me Madam,” “My Fair Lady,” “The Little King,” and “Oh, Lady! Lady!” among others, with several bright members of the company: Aidan Smerud, Sarah Diller, Olivia Maughan, Christopher Oglesby, Gretchen Windt, Jamie Rapaport, C.J. David, and Grace Caudle. Former OLO Associate Music Director and entertainer Courtney Kenny offered a delicious recital of “The Best of British Musical Theatre,” accompanying himself on the piano, with some wonderful West End chestnuts, including pieces by Flanders & Swann, Vivien Ellis and Ivor Novello. And, most movingly, the late operetta historian – and longtime OLO translator and set designer – Richard Traubner, who died last year after a brave battle with ALS, was honored with a musical tribute of some of his best translations, and other favorite works. Andrea Traubner warmly introduced the recital which was narrated by Executive Director Laura Neil and longtime OLO Artistic Director Steven Daigle, and beautifully sung by Windt, Stephen Faulk, Nathan Brian, and Natalie Ballenger. Eric Andries accompanied the first and last recitals. 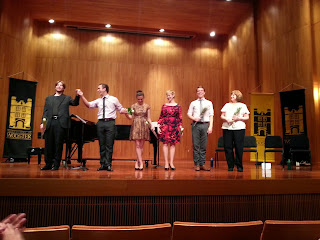 Musical values were high throughout the week, whether under the leadership of Lynn Thompson (“Pirates,” “Oh, Lady! Lady!” and “My Fair Lady”); Steven Byess (“Dream City,” “The Little King,” and “Call Me Madam”); or Jonathan Girard (“Die Fledermaus”).

A great part of the fun was watching the hugely talented OLO performers playing different roles, or simply joining the chorus of another production, an experience much like watching those marvelous British actors transform themselves completely from one role to the next in a repertory company like the National Theatre.

Tenor Clark Sturdevant, for instance, was Frederic in “Pirates,” Lohengrin in “The Magic Knight,” the unhappy titular monarch in “The Little King,” and a 1950s-era congressman in “Call Me Madam.” Mezzo Alexa Devlin played a raucous hillbilly in “Dream City,” a comic jewel thief in “Oh, Lady! Lady!” and the Merman role in “Call Me Madam.” And so it was with the others.

The versatile Daigle directed all the shows except for “My Fair Lady” and “Die Fledermaus” and had the style down pat for each one. The former was in the hands of Jacob Allen who, wearing his performing hat in “Fledermaus,” managed to make the often tedious character of Frosch the jailer bearable. “Fledermaus,” in turn, was helmed by Ted Christopher who played a superb Henry Higgins (as good as any I’ve seen), an entertaining Pirate King with apt melodramatic flourishes, and then took the romantic lead in “Call Me Madam” with suave assurance.

“Die Fledermaus” was nice enough (and the music was certainly beautifully played from first to last), but was perhaps the most expendable of the group, by dint of its over-familiarity. The same might be said of “Pirates,” though that production had a particularly strong cast, and was directed with a freshness that made it more than tolerable.

“My Fair Lady” was solidly traditional, satisfying both musically and dramatically. There was real dramatic tension between Eliza (Tanya Roberts at my performance), and Higgins. And Daniel Neer’s characterful Alfred Doolittle was but one of five impressive roles this season.

Irving Berlin’s “Call Me Madam” was given as brassy a Broadway-style production as one would wish, and though constructed as a star vehicle, worked well enough thanks to Devlin’s powerful pipes and likeable if youthful demeanor. She and tenor Stephen Faulk as her young attache made their “You’re Just in Love” duet an honest-to-goodness showstopper, leading the audience to demand an unplanned second encore. (Faulk was another of this season’s bright lights, with standout roles in “Dream City” and “The Little King.”)

But the gems of this season’s repertoire were, by general consensus, the Herbert and the Kalman resurrections. “Dream City” concerns the efforts of a shady real estate broker to persuade a local Long Island farmer to sell his property for a proposed Dream City on the site bringing about “improvements” to the townspeople. The farmer dreams of that fantastical future, during which all the townsfolk go to an opera, the farmer not at all willingly, and this is where “The Magic Knight,” a delicious parody of “Lohengrin” is played. The “Dream City” sequences filled with one snappy tune after another, and the parodistic touches of “The Magic Knight” vividly affirmed Herbert’s superb musical know-how.

There’s an excellent twin-pianos recording from Michigan’s worthy Comic Opera Guild, but the orchestrations here made a world of difference. As Ledbetter remarked in the final seminar, after knowing the work from merely the piano score, hearing the full orchestra was akin to Dorothy walking from black and white Kansas into a Technicolor Oz! 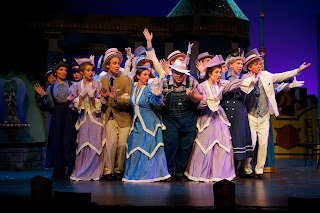 The surprise of “The Little King” (the English performance edition courtesy of Daigle) was how unlike the more familiar Hungarian flavored Kalman works this as “Countess Mariza” or “Die Czardasfurstin.” But the music of this early work was lushly beautiful, and the comic numbers – in the confident hands of Gretchen Windt and Anthony Maida (very funny in all his comic roles) – made a sprightly contrast. The story was loosely based on a contemporaneous true story of a young king of Portugal, Manual II, forced into exile by revolutionaries, and his love affair with singer/dancer Gaby Deslys.

Adding the ultimate authenticity to the occasion, there was the composer’s daughter, Yvonne Kalman, in vivacious front-row attendance. When she took the stage, cradling a bouquet, she enthused about how thrilled she was to see a work of her father’s she had never seen before, but not only that, “to see it alive…to see it so well done.” 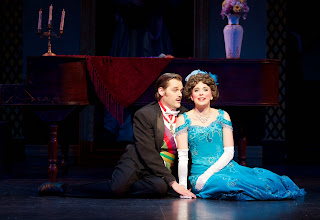 Natalie Ballenger gracefully enacted the fictionalized singer in that work, and later that same day, became the farmer’s daughter in “Dream City” sharing a bravura vaudeville turn (including an impersonation of Lillian Russell) with co-star Nathan Brian as the real estate con man, the archetypal city slicker if ever there was one.

Brian made another dynamic appearance in “Oh, Lady! Lady!” as a hapless bridegroom-to-be entangled in farcical predicaments. Wendy Marck as his fiancée sounded lovely warbling the original version of “Bill.” (The song was cut from the original production and, much later, in revised form, inserted into “Show Boat.”)

Julie Wright Costa, who sang a magnificent “My Dearest Dear” at the Traubner concert, played her imperious mother, as well as vivid character roles in the other productions, too, inhabiting each expertly. She was also outstanding in the Kenny recital, singing still more Novello numbers quite superbly.

I could go on, but suffice to say, I found my visit an altogether enriching experience from first to last. Dream City indeed!