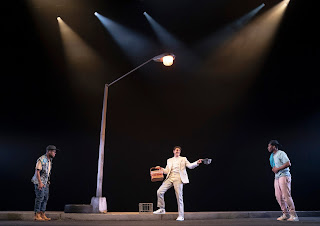 Antoinette Chinonye Nwandu’s alternately poignant and mordantly funny take on systemic racism draws its unlikely inspiration from a sort of mashup of  “Waiting for Godot” and the Exodus story. The play illuminates the emotional angst fueling the Black Lives Matter movement as well as anything I’ve een.

“Pass Over” had its premiere by Chicago’s Steppenwolf Theatre Company in 2017, and was filmed by Spike Lee. (It can currently be viewed on Amazon Prime Video). It was mounted with one of the original cast members at Lincoln Center Theater in 2018.

I didn’t catch the Lincoln Center version but I can attest that the production as it currently stands inaugurates the reopening of Broadway in a classy and compelling fashion.

Nwandu has provided a radically revised ending (which, based on comparison with the Spike Lee film, I’d say is far superior and satisfying). If there were any concerns about this three-hander filling a Broadway stage, they prove groundless as the piece works beautifully in the larger venue. The wonderfully creative Danya Taymor who’s been attached to the project from the start, directs the brilliant Lincoln Center cast through a virtuoso kaleidoscope of shifting moods and tone.

Moses (original Steppenwolf star Jon Michael Hill) and Kitsch (Namir Smallwood) are trapped by their own fears on a desolate street afraid to venture to the “promised land” and face myriad racist-fueled dangers. Even on in their present location, they live in perpetual fear of the police (the “po-pols”). The recent death of a friend of theirs at the hands of the law reinforces their justifiable inertia. So they are trapped in a kind of limbo longing for the world outside, scrounging for food, fantasizing about the top ten things they’d like to do when they get out, and role playing confrontations with the police.

Into this insular world suddenly comes a lost white man identified as Mister (Gabriel Ebert) carrying a food basket, rather like Little Red Riding Hood -- en route to his mother’s house. He offers to share his bounty with them. He’s full of “gosh, oh golly” disingenuousness, and thoughtlessly patronizing at every turn. The  lengthy and funny scene epitomizes the racial divide.

Ebert is a hoot in this role, though the versatile actor returns shortly thereafter in a far more sinister part.

The interplay between Hill and Smallwood throughout is extraordinary. Though Nwandu’s dialogue is a stream of street language -- with liberal use of the “n” word -- the men give each exchange infinite shadings. In fact, these are two of the most vocally and physically virtuosic performances you’re liking to see this season.

The occasion marks the Broadway debuts of both Nwandu and Taymor whose razor sharp direction is enhanced by some wonderful choreographed movement (Bill Irwin was a consultant).

There’s real poetry in Nwandu’s smart and observant dialogue which, as per the play’s title, has its share of Biblical allusions.

Wilson Chin’s simple but evocative set (a looming streetlamp and a large garbage can), atmospherically lighted by Marcus Doshi), captures the desolate mood, and stands in striking contrast to the more lush setting of the play’s final minutes.

Far from the static mood you might expect from a play about characters paralyzed into inaction, the gripping “Pass Over” offers suspense, drama, comedy, an occasional song, and three not-to-be-missed performances.