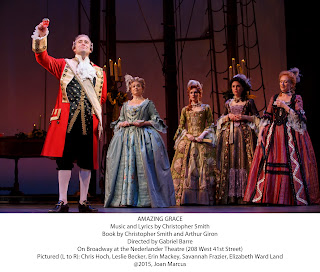 This is a reasonably compelling, resourcefully staged, and certainly richly designed story of slave trader John Newton and how he came to renounce his evil ways, eventually writing the words to the famous hymn that gives the show its name.

That song apart (and we hear it only at the end of the show, quite movingly sung), the score by first timer (and, according to his Playbill bio) self-taught musician) Christopher Smith is merely generic in the familiar pop opera mold. Though it never delivers the memorable melodies of Lloyd Webber or Schoenberg, it is, at least, commendably free of the mindless bombast of so many other works of the genre.

And when the singing stops, and the drama takes over, the show has some decent – if clichéd -- straight scenes; it reminded me of those good live-action Disney films of the 1950s and 1960s which dramatized historical subjects. Smith co-wrote the book with Arthur Giron, and it does hold your interest, though, as in those Disney films, historical truth has taken second place to dramatic license. Newton’s life was far more complex, he did not abandon the slave trade overnight, and his conversion was much more profound than as dramatized here. But the script is compelling enough to make you want to know more about what really happened.

Gabriel Barre’s direction is admirably clear and unfussy, and though the show is mostly composed of intimate scenes, there are two rather spectacular set pieces, a shipwreck involving an underwater rescue and a powerful storm at sea in the second act.

Performances are capable throughout, and in some cases more than that, though English accents are pretty dodgy. I kept having to remind myself that the story wasn't taking place in, say, colonial Boston. Laiona Michelle as the heroine’s faithful Nanna, and Chuck Cooper as Thomas, manservant to Newton give especially fine, dignified portrayals, and Harriet D. Foy has a field day as the manipulative Princess Peyai, a slave trader who captures Newton after the shipwreck off the coast of Sierra Leone. There are, incidentally, some realistic depictions of slave auctions, strong stuff for a musical.

Josh Young is an impressive singer and acts well enough as Newton, but I felt we was perhaps a shade generic for the part, while his faithful love Mary Catlett, as played by vocally adept Erin Mackey, is rather cool in the Kelli O’Hara manner.

Veteran Tom Hewitt as Newton’s long-suffering father does his best with a caricatured role (his relationship with son John made to parallel that of the Prodigal Son). Chris Hoch has the thankless task of playing Major Gray, the show’s villain who contrives to get Newton gang-pressed to sea, so he can woo Mary himself.

Eugene Lee and Edward Pierce’s scenic design, dominated by nautical rigging, is quite striking, and I couldn’t help remembering that this was the very same stage that once held “Billy,” a short lived musical version of “Billy Budd” which closed, undeservedly, after a short run back in 1969. Toni-Leslie James’ costumes are a period eyeful, Ken Billington and Paul Miller’s lighting design is also very fine. A special nod is due sound designer Jon Weston for a fine, naturalistic ambiance.

The show is not to be confused with the 2006 film of the same title in which Newton (as played by Albert Finney) figured, but was focused mainly on the abolitionist William Wilberforce.

Posted by Harry Forbes at 6:32 AM 0 comments 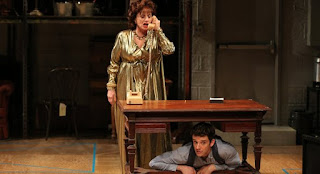 Patti LuPone’s deft purloining of a texting front row audience member’s cell phone – an action deservedly praised far and wide -- is likely to be how posterity will best remember Douglas Carter Beane’s paean to community theater. For, truth to tell, the play is not otherwise one for the ages, though there are pleasurable elements, chief among them, Ms. LuPone herself.

This is an autobiographically inspired story of a young man’s introduction to the theater; specifically, a regional playhouse in Reading, Pennsylvania in 1973.

Of course, we’ve seen this sort of story before, done rather more persuasively. Last season’s adaptation of Moss Hart’s “Act One,” also from Lincoln Center Theater, is such a one. “A Life in the Theater,” is another.

Beane’s semi-autobiographical plot involves a young man named Car (the engaging Michael Urie, though some of his opening remarks struck me as more cloying than endearing). We first see him as an adult, before the play flashes back to his recollections of being a 14-year-old teenager stumbling into the theater run by the indomitable Irene (LuPone in entertainingly dynamic form). In short order, he’s swept up in the excitement and glamor of Irene and her strange eccentric company, including Sid (Dale Soules), the butch stage manager of the Prometheus Theater, Damien (Jordan Dean), the sexually ambivalent actor having an adulterous affair with the married Irene, Clive (Lance Coadie Williams), the grandiose leading man, and Maria (Zoe Winters), the ingénue.

Car develops a crush on Damien whose perpetual teasing seems to carry sexual undercurrents. When Car writes some amusing bios of the company for the theater’s program, he’s drafted to be the resident playwright.

Their theater is eventually targeted for the wrecking ball, and only a blackmailing threat from Irene averts demolition. A rival company becomes another challenge.

Much of this progresses amusingly (with Beane is characteristic comic form), though eventually matters turn rather serious, a tonal shift that hurts the play.

Though there are some sharp jibes about the ethos of community theater, the story and most of the characters are not ultimately very convincing, and the plot’s occasionally confusing, too. Beane can write some funny lines, but you often sense them coming a mile away, and often you have the feeling you’ve heard them before. But legendary director Jerry Zaks knows how to keep things moving.

LuPone is marvelous as this larger than life character. She’s such a celebrated musical theater performer, even though she’s appeared in scores of plays, it’s always good to be reminded again what a terrific straight actress she is. Though this is one of those over-the-top roles, hers is a highly disciplined, well-crafted performance.

The rest of the ensemble is capable, with Soules and Urie the standouts.