Confessions of a Shopaholic 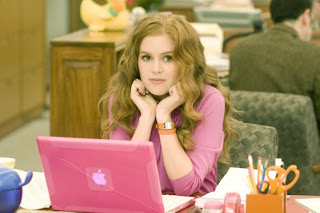 Talk about bad timing! With the world economy at an all-time low, and unemployment at a record high, can moviegoers possibly care for the antics of a ditsy compulsive shopper whose credit cards are well beyond maxed out?

The books from which it is derived may be best-sellers, but "Confessions of a Shopaholic" (Touchstone/Bruckheimer) is a mostly silly romantic comedy with the pretty but manic Isla Fisher as Rebecca Bloomwood, the cheerful madcap who believes shopping can cure all ills.

Knee-deep in debt (to the tune of a cool $16,000), Rebecca yearns to work at a fashion magazine, the fictional Alette. But, in hopes of getting her foot in the door, instead takes a job at a sister publication called, of all things, Successful Savings.

Under the guidance of her good-looking workaholic boss Luke Brandon (Hugh Dancy), whom she first "met cute" moments before her job interview at a hot dog stand, she achieves improbable success writing an anonymous down-to-earth column advising readers how to stay out of debt.

No one at the magazine knows of her financial plight, and though she's now the toast of the magazine, she still, improbably, yearns for a position at Alette, run by its namesake, coolly elegant fashion maven Alette Naylor (bilingual Kristin Scott Thomas sporting a French accent).

Director P.J. Hogan's adaptation of the novels by Sophie Kinsella (who served as an associate producer) is glossy and colorful with its sleek New York scenes (changed from the book's London locale), and there are some nifty special effects involving the "talking" clothing store mannequins who beckon the wide-eyed Rebecca to buy their wares.

The leads are not without sporadic charm, despite Rebecca's persistent vapidity, and there are some reliable actors such as Joan Cusack and John Goodman as Rebecca's hard-working parents, and John Lithgow and Christine Ebersole in other supporting roles.

But the film is a paean to materialism even as it pretends to convey a quite contrary message, and many will find it gratingly offensive in its relentless homage to the products it shamelessly plugs throughout. It's only a small spoiler to reveal that, of course, Rebecca learns to be fiscally responsible by the movie's end. But even if the wrap-up is morally sound, the lure of the next purchase is still made to look pretty darned irresistible.

And until her turnaround, Rebecca's ongoing lack of common sense for so long becomes more annoying than hilarious.

The best comedies need to be grounded in some kind of reality, but here, an overabundance of fairly dopey slapstick undermines the humor. When attending her first magazine board meeting, for instance, Rebecca prevents Luke from answering a phone call from the humorless debt collector (Robert Stanton) who's been hounding her, by hurling herself onto and sliding across the length of the board table to intercept the call.

Tracey Jackson, Tim Firth and Kayla Alpert's script -- apparently an amalgam of two in the Kinsella "chick lit" series -- is sometimes confusing and often improbable, though it gets some good mileage out of Rebecca's enforced attendance at a Shopaholics Anonymous support group.
Posted by Harry Forbes at 1:24 PM 0 comments