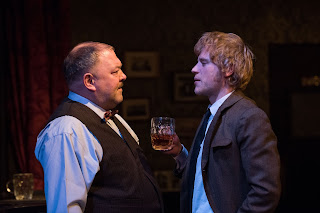 
Martin McDonagh’s latest -- already glimpsed on these shores in a memorable NT Live transmission in cinemas last year -- now receives an accomplished mounting by Atlantic Theater Company, one which will only add to the accolades (and, no doubt, awards stash) that the Irish playwright has been garnering for his current film, “Three Billboards Outside of Epping, Missouri.”


Finely cast here, and anchored by three members of the London production, the play is a gripping, mordantly funny black comedy that, like McDonagh’s other plays, keeps you on the edge of your seat throughout.


Set in Lancashire in the mid-1960s -- the last days during which hanging was employed for capital punishment -- the play begins with the execution of a hapless fellow named Hennessy (a properly agitated Gilles Geary) frantically proclaiming his innocence. Hangman Harry (Mark Addy) is the unyielding supervisor of the proceedings, assisted by his spineless henchman Syd (Reece Shearsmith).


There’s a fade-out after this harrowing scene, after which the lights come up two years later on a dreary pub setting (beautifully designed by Anna Fleischle who also did the apt costumes, and atmospherically lighted by Joshua Carr). Harry and his wife Alice (Sally Rogers) are the proprietors, and braggart Harry proudly recalls his days as a hangman, giving a boastful interview to pushy local reporter Clegg (Owen Campbell).


When Shirley goes missing after failing to return after a presumed visit to a girlfriend in a mental hospital, and Syd, estranged from Harry after being fired years earlier for displaying an undue fascination with the private parts of their deceased victims  -- appears on the scene with dark insinuations about a possible killer whose looks would seem to mirror that of Mooney, the scene is laid for a typical McDonagh cocktail of menace and outright violence.


To say more would spoil the delicious twists.


Original director Matthew Dunster orchestrates the suspense to maximum effect, and draws fine performances from the cast which has the full measure of McDonagh’s characteristic dialogue, absurdly commonplace and recognizably realistic even in the most outrageous circumstances.


Billy Carter, Richard Hollis, and John Horton excel as the pub’s regular denizens, Horton especially funny as a hard-of-hearing old geezer who always manages to say the wrong thing. And David Lansbury rounds out the sorry crew as a singularly laid back, not to mention indulgent, barfly.


Flynn, Rogers, and Shearsmith are recreating their original roles and are as superb here as they were in London. Brits Addy and French match their predecessors.


Maxwell Caulfield has a pivotal second act role as Harry’s nemesis, the real-life Albert Pierrepoint, England’s legendary hangman (and fellow pub owner) who bursts in at a crucial moment to berate Harry for his lack of discretion in the newspaper profile, though I must confess some difficulty in deciphering some of Caulfield’s perhaps too authentic Northern dialect.


For all the laughs, McDonagh is making trenchant points about justice, vengeance, and of course, capital punishment. But despite those heavy-duty themes, the play is, above all, juicily entertaining. A deserved Broadway transfer has already been announced, just as the original Royal Court production made its inevitable way to the West End. 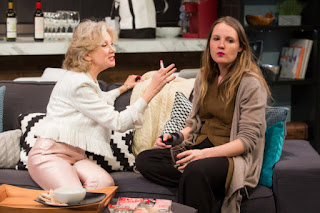 
Hayley Mills provides the principal spark in Isobel Mahon's pleasant if unremarkable domestic Irish comedy/drama. She plays Carmel, a domineering, though not altogether horrid, mother visiting her daughter Mollie May (Gina Costigan) who’s been recently released from a psychiatric ward and now hosting a modest party to show off her new kitchen extension in her suburban Dublin home (sleekly attractive set by Jeff Ridenour).


The guests include cynical sister Maeve (Brenda Meaney) and gossipy neighbor Chloe (Allison Jean White), the latter invited by status-conscious Carmel without her daughters’ knowledge. In the second act, they are joined by germaphobe tomboy Bernie (Klea Blackhurst providing some lively moments). The lady, we learn, was one of Mollie May’s fellow patients in the home. (She’s both manic-depressive and compulsive-obsessive.)


Maeve is divorced, and we never see Mollie May’s husband Alan or their two children. Alan has apparently been absent during Mollie May’s recent travails, and Carmel is kept in the dark about why, but as is eventually revealed, he has, in fact, left home.


A first act flood and a second act catfight give offer the cast some opportunity for physical comedy, and the second act opens with the party in full swing and the ladies dancing in a conga line around the stage to a disco beat, a briefly fun moment that leavens the increasingly serious proceedings, not dissimilar to the impromptu dance occurring in Lucy Kirkwood’s post-apocalyptic “The Children” at Manhattan Theatre Club.


Isobel Mahon’s play is at best innocuously diverting rather than side-splittingly funny, and the whole situation feels more than a little contrived. When the play aims for poignancy, as for instance in Mollie May’s second act accounting of her breakdown, which Costigan delivers superbly with genuine gravity, the shift in tone is rather jarring.


Platitudinous busybody Chloe’s prying into the family’s affairs is particularly unconvincing. And there’s a late play revelation which you’ll probably have long since guessed anyway. Director Amanda Bearse -- who played Marcy D’Arcy on “Married with Children” --  puts her good cast through the paces capably enough, though there’s a sitcom feel to the whole enterprise.


The ladies make a cosy ensemble all in all, but the real treat is Mills, whom we’ve seen far too infrequently here in New York. She nails the domineering, constantly undermining parts of her role, while still retaining her charm. She looks great (nicely outfitted by Lara De Bruijn), demonstrates her stage savviness, and though she affects an Irish brogue here, every so often you catch the voice of the delightful youngster we all so fondly recall from the Disney films.


There were some halftime walkouts -- “Just a bunch of women talking shite,” one man was heard to comment -- but the second act passed enjoyably enough, and earned decent applause. 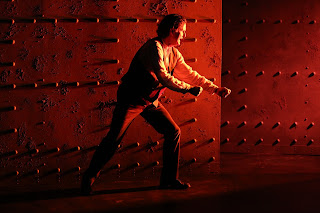 
“Not the Titanic again” you might be thinking. Well, yes it is, but playwright Bernard McMullan’s well-structured take on the iconic 1912 tragedy is uniquely powerful, and provides a one-man showcase for star Colin Hamell who plays an impressive variety of 20-odd characters throughout the 75-minute performance.


The titular Jimmy Boyle (fictitious) is a Belfast dock worker who, after helping construct the ship, earns a job shoveling coal on the doomed vessel’s maiden voyage with his friend Johnny. Hamell embodies those two characters, as well as other unsung crewmen, the ship’s high and low-born passengers (from John Jacob Astor to a poor Italian man imploring help for his family), an anxious New York Times editor, and a Belfast mayor who fears that the city will be blamed for the ship’s faulty construction.


The plights of the ship workers and the doomed passengers are poignantly dramatized. The whole is framed by a whimsical setup of Jimmy in Heaven where, as a survivor, he has become quite the star, as he intermingles with an effete, practical joking Gabriel, a very Italian St. Peter, and a goodfella God.


These Heaven scenes may sound hokey on paper, but actually the brew of humor -- which includes such conceits as a disco where Jimmy has become a magnet for the ladies thanks to his Titanic exploits  -- and high drama are a canny dramatic device, and McMullan doesn’t pull any punches when describing the flaws in the Titanic’s makeup, the inadequate emergency measures, the fatal errors in judgement in terms of the evacuation, and of course, the many instances of bravery and self-sacrifice.


And without weighing down the play with ponderous facts, McMullan manages to work in plenty of extraordinary statistics about the 1500 fatalities (all but one of the numerous newlywed husbands perished, to cite one such) and how the lifeboats that were not filled to capacity, resulting in the needless death of several hundred.


Hamell relates all this with alternating charm, intensity, and unflagging energy.


The piece premiered at Origin Theatre’s 1st Irish Theatre Festival NYC in 2012, and has toured since. It’s been directed by Carmel O’Reilly at a fast-moving, absorbing pace. The whole is greatly enhanced by Michael Gottlieb’s evocative rivet-studded backdrop, new to the Irish Rep’s mounting,  and dramatic lighting, as when Hamell mimes shoveling coal in the fiery furnace.


Simple as the production is, it packs as much of a wallop, in its way, as James Cameron’s epic film and other big budget tellings.