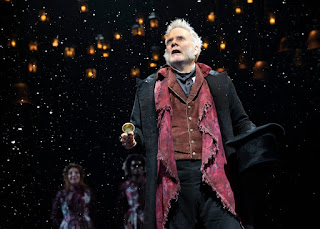 
This altogether delightful and poignant adaptation of Charles Dickens’ seasonal favorite is warming the Lyceum through the holiday season. Campbell Scott as Ebenezer Scrooge successfully takes up the mantle of his late dad, George C. Scott, who memorably played the role in a 1984 TV adaptation.


Freshly but respectfully revamped by playwright Jack Thorne (“Harry Potter & the Cursed Child,” “His Dark Materials” on HBO), who has demonstrated his skill with literary adaptations, the production has played three successful seasons at London’s Old Vic and was directed by its artistic director Matthew Warchus.


Though very much geared to the sensibilities of an adult audience, the production is ideal family entertainment for all but the youngest children.


Stylishly conceived by Rob Howell (who also designed the attractive Victorian costumes) with a profusion of hanging lanterns, and abstract sets (empty door frames are a significant motif), the script follows the familiar Dickens outline, but with both some trimming (the ghosts’ visitations happen quickly), and embellishments, which give the whole a fresh feeling without ever betraying the source material. Scrooge’s ultimate turnabout is managed far more realistically, but no less satisfyingly.


Thorne has, in fact, crafted a psychological backstory for Scrooge including an abusive, alcoholic father (Chris Hoch, who doubles as Marley’s ghost). The penurious father’s threatening and insistent demands for money are shown to have sown the seeds of Scrooge’s avarice.


Scrooge’s ghosts are played by Andrea Martin (Christmas Past) and LaChanze (a Caribbean-accented Christmas Present), and they bring a delightful but equally potent presence to those parts.


Scrooge rules his office with an iron hand insensitive to his long-suffering but ever-cheerful clerk Bob Cratchit (Dashiell Eaves). As in other versions, we see him rebuffing the hearty greetings of his nephew Fred (Brandon Gill). In the flashback scenes, we meet the love Scrooge let get away, Belle (Sarah Hunt). Belle’s role is expanded and given considerably more agency, particularly in a scene which follows Scrooge’s reformation, after which we also meet Cratchit’s family, including his wife (Erica Dorfler) and, of course, Tiny Tim (Jai Ram Srinivasan at my performance, here a cheeky young actor with cerebral palsy).


The staging is highly engaging. Pre-show carolers throw cookies and clementines into the audience from the stage while other cast mates hand out treats from the floor. There’s a quite wondrous snow effect in the second act. And when Scrooge decides to show his beneficence, the audience participates in passing the various foodstuffs onto the stage.


There’s a lovely use of traditional Christmas music throughout, culminating in a magical rendering of “Silent Night” on hand bells.


It would be lovely if this production, with its striking use of stagecraft, could become an annual tradition as at the Old Vic.


Photo by Joan Marcus
Posted by Harry Forbes at 11:14 AM 0 comments