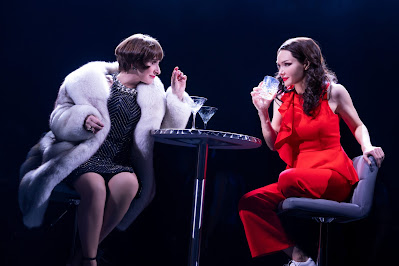 Even knowing the central conceit of director Marianne Elliott’s clever rethinking of Stephen Sondheim and George Furth’s 1970 “Company” -- that is, recasting bachelor Bobby as bachelorette Bobbie -- didn’t prepare me for the marvelously fresh all round approach.

This production transforms “Company” into virtually a whole new show. For beyond the gender switching, Elliott’s staging is consistently inventive, and David Cullen’s new orchestrations give Sondheim’s music a bracing sheen.

The casting is strong. Katrina Lenk makes an appropriately detached but always appealing protagonist facing her 35th birthday at every turn (increasingly large mylar “35” balloons hammer home the point). The major shift of having a woman pressured by her friends to get married brings the show persuasively up to date, along with other cosmetic changes of cell phones and such.

The biological clock is always ticking, and that theme is hilariously illustrated by the “Tick Tock” dance, now a nightmarish vision of what Bobbie’s married future could be. (Liam Steel did the nifty choreography.)

Patti LuPone, the only holdover from the production’s London premiere, gives a wonderfully canny performance. Her Joanne in the PBS “Live from Lincoln Center” concert from 2011 impressed, so it’s no surprise to hear how well she nails “The Ladies Who Lunch” and “The Little Things You Do Together,” and at this point, I think it’s fair to say she owns the role of the hard-drinking socialite as much as originator Elaine Stritch. Her delivery of the “Ladies Who Lunch” to Bobbie now registers as a cautionary lesson.

George Furth’s comic scenes have never played so amusingly, but there’s underlying poignancy as well. When Jamie (formerly Amy) sings his fearful “Getting Married Today” (and Matt Doyle does it superbly at breakneck speed), followed by a nervous conversation with his intended Paul (Etai Benson), the talk suddenly takes a genuinely solemn turn when the depth of Jamie’s love is questioned. It’s a superbly dramatic moment that packs a heartstopping wallop.

Bobbie observes all of this, along with the concurrent marital bliss and woes of her other married friends Harry (Christopher Sieber) and Sarah (Jennifer Simard), Peter (Greg Hildreth) and Susan (Rashidra Scott), David (Christopher Fitzgerlad) and Jenny (Nikki Renée Daniels), and Larry (fine Tally Sessions at the reviewed performance) and Joanne (LuPone). Apart from Jamie’s gender swap, the couples are played as written, though there’s some up-to-date diversity.

Particular comic standouts include the opening jiu-jitsu scene between on-the-wagon Harry and fitness fanatic Sarah, and the pot smoking between David and Jenny, with the former getting high not his wife as before. Simard and Fitzgerald are particularly delicious in these scenes.

Of course, Bobbie’s three suitors are now perforce male, and the delightful trio “You Could Drive a Person Crazy” is another showstopper as performed by Andy (Claybourne Elder, excellent too in the “Barcelona” scene with Lenk), Theo (Manu Narayan), and PJ (Bobby Conte) who does a fine “Another Hundred People,” originally sung by Marta.\ 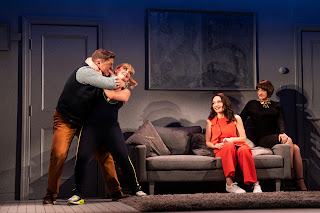 Bunny Christie’s colorful setting -- including giant letters spelling "COMPANY," and at one point “NYC” for this is, after all, a quintessential New York musical, and a series of increasingly cramped “Alice in Wonderland” rooms --  entertainingly lit by Neil Austin with lots of hot neon.

The sound design by Ian Dickinson for Autograph is exemplary, a rarity these days.

All in all, this rates as one of the very best Sondheim revivals ever. It’s so nice to know that the great man was able to see it before his recent passing. 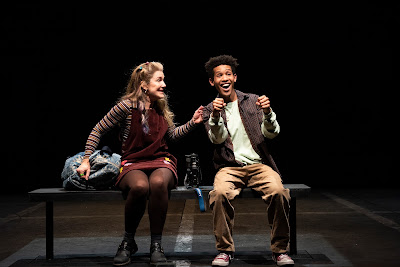 I didn’t catch the 2003 Manhattan Theater Club production of David Lindsay-Abaire’s play, but the musical he and composer Jeanine Tesori have fashioned from it is a winner, and is being accorded a beautiful production at the Atlantic Theater Company under the direction of Jessica Stone (choreography by Danny Mefford).

The unusual narrative tells of 16-year-old Kimberly who has a rare genetic disorder that makes her age four or five times faster than normal, with an attendant shortened life span. Though she looks far older, she’s still just a teenager, and that aspect is played most convincingly by the great Victoria Clark.

Kim is the rational center of a dysfunctional family including an alcoholic father Buddy (Steven Boyer), a dreamy, hypochondriac mother Pattie (Alli Mauzey), pregnant and fearful of another genetically challenged child, and a felonious aunt Debra (show-stopping dynamo Bonnie Milligan). The setting is “somewhere in Bergen County, NJ,” and we learn the family had to leave their last residence after an incident not revealed till the second act. Both Boyer and Mauzey do fine work with their multifaceted characters.

Kim’s nerdy, anagram-loving, tuba-playing pal Seth (standout Justin Cooley) loves her but is sensitive enough not to force himself on her. Their four classmates, characters not in the original play, provide added texture and comic relief, and they are appealingly played by Olivia Elease Hardy, Fernell Hogan II, Nina White, and Michael Iskander.

An amusing subplot involves ex-con Debra recruiting the kids for an elaborate check-forging scheme, luring them with the idea they’ll be able to earn the needed money for flashy costumes for their glee club.

Meanwhile, the class is involved in a science project with each team of two asked to research and explain a disease of their choice. Kim plans to do glaucoma, but her project partner Seth persuades Kim to take on her progeria-like condition, a decision that leads to an emotional crisis for Kim.

The material is sensitively handled all around. There are no villains here, and even Kim’s dodgy family eventually shows its better side. The unspoken love between Seth and Kim is presented with utmost delicacy so there’s nothing to make an audience squirm given the real-life age difference between Clark and Cooley.

David Zinn’s simple sets effectively encompass everything from the ice-skating rink, to the family’s living room, to the school library, all astutely lit by Lap Chi Chu. Sarah Laux’s costumes are spot on for both the characters and 1999 setting.

The score is another feather in the versatile Tesori’s cap, unfailingly tuneful and running an impressive gamut of styles. Lindsay-Abaire, with whom she collaborated on Broadway’s “Shrek” musical, has supplied the astute, above-average lyrics. “Getting older is my affliction, getting older is your cure,” sings Kim at one point. 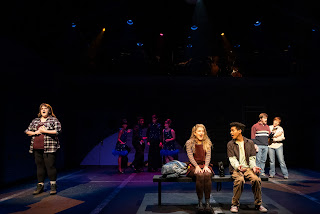 Though Kim’s mortality issues are never glossed over, the show still concludes on a joyful, affirmative note.