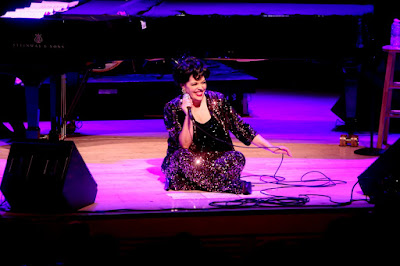 On the occasion of what would have been Judy Garland’s 100th birthday, here it seemed was the lady once again bringing the house to its feet multiple times this past Saturday at the venue of her legendary triumph back in 1961.

Of course, it wasn’t really the late Garland herself but rather a phenomenal British performer named Debbie Wileman. Nor for that matter, was it the Stern auditorium on which stage Judy actually performed that legendary night six decades ago, but the adjoining and prestigious concert hall underneath.

Still, the sold-out house greeted Wileman’s first entrance as if it were the second coming of Judy herself and her performance didn’t disappoint. She opened with Stephen Sondheim’s “I’m Still Here,”  a song which, needless to say, Garland didn’t live to perform. The recreation of Garland’s vocal timbre was uncannily accurate right from the start. The “Follies” song also opens Wileman’s tie-in CD, consisting almost entirely of songs Garland never actually sang, wonderfully orchestrated, conducted and produced by Grammy Award-winning Steve Orich, with Wileman channeling the inimitable Garland style on each track.

Michele Lee, Renee Taylor, and Tracie Bennett (who played Judy in “End of the Rainbow” on Broadway) were among the celebrities cheering on Wileman, as was former Garland beau John Mayer who received a warm introduction from Wileman before she sang one of the memorable songs he wrote for Garland: “I’d Like to Hate Myself in the Morning.”

The UK-based singer and actress created a social media sensation on Facebook when she posted songs by Garland and other singers during the pandemic. The Zankel Hall performance marked her New York debut after performances in London. In addition, her U.S. tour included Fort Lauderdale, Orlando, Provincetown, and Los Angeles.

Impressive as her homemade videos are, seeing her in person is even more remarkable. The strong-voiced Wileman is quite the phenomenon, summoning Garland better than any impressionist I’ve ever seen. And with plenty of stage presence of her own.

What sets Wileman further apart from many of the Garland impersonators of the past is the genuine quality of her voice, the solid musicianship of her approach, and the sensitive interpretation of the lyrics. She was given superlative accompaniment from Music Director Ron Abel, and a first-rate band including Jack Cavari (guitar), Robert Cookman (synthesizer), Ritt Henn (Bass), Ben Kono (saxophone), Ray Marchica (drums), and Kurt Marcum (trumpet).

On her first entrance, one thought she might  “do” Garland all evening, but wisely, after the first couple of numbers, she spoke with her own English accent in a charming and down-to-earth manner, only sporadically mimicking Judy for some spoken patter. And as with her singing, her impression of Garland’s speaking cadence was spot-on accurate.

The program was most sensibly laid out with Garland evergreens alternating with some of the new songs featured on the album. This is the Garland of the 1960’s, the voice a bit frayed at the edges, but strong and dynamic. Wileman captures Garland’s unique timbre so well that the occasional word, phrase or stage movement that slightly misses the mark stands out. But those moments were surprisingly rare.

Wileman gave us a satisfying taste of what Garland’s “Mame” might have sounded like if she had gotten the role she coveted. Wileman offered splendid versions of “It’s Today” and “If He Walked into My Life.” And, arguably, even more impressive were Amy Winehouse’s “Back to Black” and Paul McCartney’s “Yesterday” and “Got to Get You Into My Life” sung quite plausibly in the Garland style. There was also a quite brilliant arrangement of Patsy Cline’s “Crazy” with a musical counterpoint of “You Go to My Head.” The most intimate number was “A Foggy Day,” sung to Abel’s piano accompaniment, feelingly vocalized.

By the time, she belted out the “You Made Me Love You/“For Me & My Gal”/”Trolley Song” and “Almost Like Being in Love”/”This Can’t Be Love” medleys, two of Garland’s Carnegie Hall classics, Wileman and Garland seemed to be truly one. And the satisfyingly predictable “Over the Rainbow” encore, sung as authentically as all the rest, clinched the transformation. (Incidentally, Wileman recorded that song for her album on the MGM studio where Garland sang the song for “The Wizard of Oz” soundtrack.) 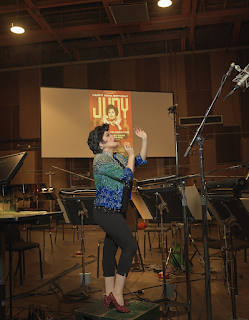 Posted by Harry Forbes at 7:34 AM 0 comments 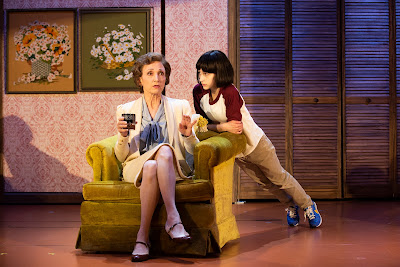 This is a quirky but entertaining musical adapted from Sarah Silverman’s memoir about her 10-year-old self (played with winning pluck by Zoe Glick), circa 1980, as she struggles to make friends at school in a new town (Bedford, NH) after her parents’ divorce.

There, she shuttles between her neurotically bedridden but caring mother Beth Ann (a moving Caissie Levy) and older sister Laura (Emily Zimmerman), and her boorish and loving father Donald (Darren Goldstein) who runs a discount clothing store and makes hucksterish TV commercials for the store. He lives with his aging and cheerfully alcoholic mother Nana (sharp character portrayal by Bebe Neuwirth).

Sarah’s big secret, as the title reveals, is that she still wets her bed, a malady that -- once revealed to her friends, much to Sarah’s intense mortification -- spurs her father to take the girl to first a hypnotist and then a medical doctor (both played by versatile Rick Crom who also shows up later as a plausible Johnny Carson).

The cast is strong and everyone gets their moment to shine both vocally and dramatically. Glick makes Sarah as precociously annoying as the script dictates, though frankly, her high pitched vocals sometimes grate (even understanding the stridency is intentional), but as the show progresses, she becomes more endearing.

Though the overall tone of the show is lightweight, and the score, on first hearing, strikes me as mostly pleasantly serviceable, the second act takes a decidedly darker turn, as Sarah deals with depression, family recriminations, and more.

Silverman adapted her book with playwright Joshua Harmon (whose “Prayer for the French Republic” was such a bright spot earlier this year) and co-wrote the lyrics with composer Adam Schlesinger who tragically died of Covid-19. Composer David Yazbek, who knows a thing or two about musicals, served as creative consultant.

Anne Kauffman directs with empathy for the material, and there’s some cute choreography, including a chorus line of dancing giant Xanax pills, by Bryon Easley.

Posted by Harry Forbes at 8:22 AM 1 comments