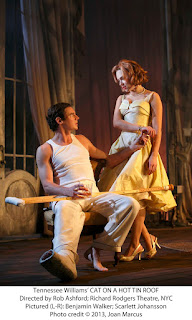 As far as “Cat” revivals go, Rob Ashford’s current production ranks pretty high in my book. I’d say it’s superior, all in all, to the most recent: the James Earl Jones (mostly) black production. the Ashley Judd version (though, in fairness, I only saw that in London with Brendon Frasier as Brick, pre-Broadway), and going further back, the Kathleen Turner mounting, which is not to say that each of those were without their individual merits.

Best of all, of course, was the 1974 Elizabeth Ashley version which, as I recall, was superbly acted and directed (by Michael Kahn), but also notable for Tennessee Williams having restored some of the text that had perforce been cut in the original production, as well as the famous film which had been further bowdlerized.

The raison d’etre of the present production, as everyone knows, is star Scarlett Johansson. While her interpretation of Maggie could, as many have pointed out, benefit from a more seductive manner, she’s got genuine stage presence, projects her husky voice well, and (in Julie Weiss' stylish duds) comes across like the proverbial million dollars.

Brick, her sexually conflicted, alcoholic husband, is a difficult part, as he's largely impassive, and infuriatingly unyielding both to Maggie and his dying father, Big Daddy (Ciarán Hinds) to whom he’s the favorite son. But Benjamin Walker does a fine job of making the character more than a cipher, and his second act confrontation with Big Daddy is arguably the production’s highpoint.

That’s largely due to the superb Hinds who makes the part his own. Debra Monk’s Big Mama isn’t quite in his revelatory class but she’s very good indeed, as are Emily Bergl and Michael Park as Mae and Gooper, Big Daddy’s opportunistic daughter-in-law and other son.

Christopher Dram’s expansive bedroom set – on that impossibly large Richard Rodgers Theatre stage (the musical house is all wrong for this play) -- is striking at first view, but becomes a bit tiresome as the evening wears on, and Neil Austin’s lighting is moodily muted throughout.

And because the theater is so large, and Ashford goes to town with all sorts of off-stage ambient sound – the no-neck monsters, Negro spirituals, assorted party sounds (it’s Big Daddy’s birthday) – one must strain to hear all the dialogue, through no fault of the cast. For once, I think a little miking would be welcome.

Still, in what is turning out to be a superior season for American classics, “Cat” joins “Golden Boy” and “Picnic” on the roster of revivals well worth your time.

The production design may lean a bit towards the austere – the better to conjure the grittiness, as opposed to any nostalgia, for its early 1950’s small town Kansas setting – but visuals aside, the Roundabout’s revival of William Inge’s 1953 Pulitzer Prize winner about a hunky drifter who sets the repressed female hormones raging is an altogether admirable mounting of a still potent period piece.

As far as rethinking of classic plays go, the re-imagining here is nowhere near as radical as in director Sam Gold’s take on the same company’s “Look Back in Anger” last season, nor is set designer Andrew Lieberman’s work here anything like his surreal vision in the Osbourne play.

Gold vividly brings out Inge’s then-timely themes of sexual repression, defiance of social conventions, women’s dependence on men, loneliness and frustration, and as the playwright once put it, “the possibility of our everyday lives.”

His cast is strong across the board. There’s Ellen Burstyn as Mrs. Potts, the neighbor who takes in the buffed (and often shirtless) migrant Hal in the first place and sets the plot in motion. Mare Winningham is Flo Owens, a single mother raising two daughters: 18-year-old beauty Madge (Maggie Grace) and precocious, intellectual younger girl Millie (appealing Madeleine Martin). Versatile Elizabeth Marvel is Flo’s boarder Rosemary, a lovelorn schoolteacher who sets her aggressive cap on the reluctant Howard (Reed Birney). Marvel balances the comic and poignant aspects of her not-always-likable role well.

In the challenging role of Hal -- one that must radiate sex appeal, and ultimately demonstrate a convincingly passionate chemistry with Madge -- Sebastian Stan delivers, and conveys Hal’s vulnerability, too. To his and Grace’s great credit, under Gold’s perceptive guidance, the sparks are entirely believable.