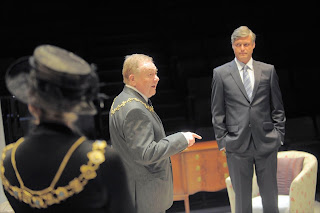 Murray (Richard Stacey), a returning war hero (after rescuing dozens of children from a burning hospital), returns with a foreign bride Baba (Evelyn Hoskins) to his home town after 17 years. But it seems Murray had left under a cloud all those years before, and past resentments and romantic entanglements make his return considerably less than the cause for celebration he hopes it will be; in fact, his reappearance proves a major catalyst for trouble.

This is the premise of Alan Ayckbourn’s 79th play, running in rep with his 1974 “Confusions," as part of the annual Brits Off Broadway festival. Though ostensibly a comedy, it’s a dark one, and the themes here are fairly serious.

Still, the narrative, with its astutely drawn characters make for a highly absorbing evening, and Ayckbourn has come up with some ingenious twists along the way. There’s Alice (Elizabeth Boag), the town’s mayor, who’d been jilted by Murray years before, and her infantile toy train-obsessed husband Derek (Russell Dixon). There’s Murray’s alleged best friend Brad (Stephen Billington), a truly loathsome misogynist (and a liar and a cheat) who inwardly envies the honors bestowed on his former pal and covets his attractive bride, and Brad’s resolutely cheerful but unhappy wife Kara (warmly sympathetic Charlotte Harwood) who has become inured to her husband’s nasty barbs but admits at one point that she feels a virtual prisoner in her home.

Murray’s unpopular plans to restore The Bird of Prey, a dilapidated hotel which had been run by his family, sets in motion an unfortunate series of events. In fact, this is the kind of play where you get the queasy feeling bad things are going to happen…and they do.

But, as always, Ayckbourn’s writing is razor sharp, and his delineation of character masterful.

Performances are quite brilliant, and it’s great fun to see the cast of “Confusions” (who demonstrated their amazing versatility in that series of five playlets) again playing roles that are so very different. This full-length work gives each of them time to build a full characterization. New to “Hero’s Welcome” is Hoskins who gives a most appealing performance.

There are many excellent moments including a particularly moving scene in the second act between Baba and Alice, sensitively written and superbly played by Boag and Hoskins.

The play does feel a bit long, and though a 2 ½ running time was promised, it ran about a good quarter of an hour longer. But it is a pleasure to report that Ayckbourn is still writing at the top of his considerable game, making this a must-see event, of course. 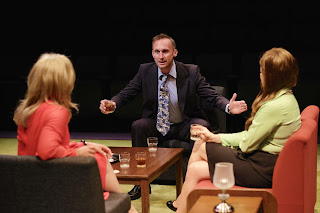 Here’s another delicious import from the Stephen Joseph Theatre in Scarborough, England, home of the premieres of most of Alan Ayckbourn’s impressive output of plays. His most recent work, “Hero’s Welcome,” which originated there, will be opening at 59E59 tonight, but this is a revival of a much earlier work from 1974, written around the time of his earliest successes such as “The Norman Conquests” and “Absurd Person Singular.”

Five short plays – three in the first half, two in the second – give five wonderfully talented actors the chance to play a variety of roles in the expert way we have long come to expect from the English. The first four are connected by at least one character from the previous playlet, and the last – five loners relating their troubles to the utterly uninterested person on the next park bench – has thematic and geographic connection.

In the first, “Mother Figure,” harried mother Lucy (Elizabeth Boag) with three offstage children, is visited by her next door neighbors (Charlotte Harwood and Stephen Billington) after they receive a query from her travelling salesman husband who has been unable to reach her. Lucy is so programmed into her parenting role that she treats the couple like children and, surprisingly, they eventually respond in kind.

In “Between Mouthfuls,” the same waiter serves two couples – a well-to-do older pair (Boag and Russell Dixon) and a younger duo (Stacey and Harwood), the workaholic husband of which works for the older man. Ayckbourn’s clever conceit here is that we only hear what the waiter does as he approaches each table to take their orders, and the stretches of alternating dialogue from one couple to the other are in amusing sync.

This is the most farcical of the bunch, with everything going wildly awry, providing a stark contrast to the aforementioned “A Talk in the Park” which is rather short on belly laughs, but high on the poignant scale, and shows the more serious side of Ayckbourn’s delineation of human nature.

Michael Holt’s set design, complemented by Jason Taylor’s lighting, prove as versatile as the players in conveying the different settings.

All in all, this is rather minor Ayckbourn, but there is still enormous pleasure to be had in appreciating the brilliance of his character writing – he nails these universally recognizable character types and their foibles to a tee – and the impressive talent of the actors who morph effortlessly from role to role.

Photo by Tony Bartholomew: Richard Stacey in CONFUSIONS, written and directed by Alan Ayckbourn, part of Brits Off Broadway at 59E59 Theaters.
Posted by Harry Forbes at 11:00 PM 0 comments