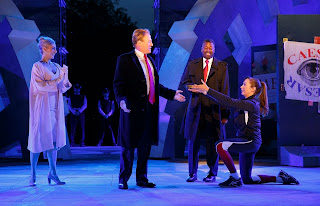 As you have surely heard by now, the conceit of director (and Public Theater Artistic Director) Oskar Eustis’ al fresco production casts the titular character as Donald Trump (in the person of Gregg Henry of TV’s “Scandal”), so Paul Tazewell’s costumes are, of course, resolutely modern dress without a toga in sight.

There’s been outrage from some quarters (including two of the Public’s sponsors, Delta Airlines and Bank of America, both of which have subsequently withdrawn their funding) presumably about the propriety of presenting our current commander-in-chief in such an unflattering light, and depicting his graphic assassination to boot, with the implication that there may be some condoning of the heinous act. But for anyone entertaining that latter interpretation, this is far from the case.

The motive for the killing in Shakespeare’s play is that Caesar, recently returned to Rome after victorious battle, has ambitious notions of accepting a crown, or so the conspirators, including Cassius (John Douglas Thompson), Casca (Teagle F. Bougere), and eventually Caesar’s beloved ally (and, according to Plutarch, possible son) Brutus (Corey Stoll) fear.

But the Bard’s actual point is that once the grisly deed is done, utter chaos ensues, and the democratic structure of the Republic begins to crumble. So Shakespeare is quite pointedly not condoning violence, but rather, as Eustis has said, “Julius Caesar can be read as a warning parable to those who try to fight for democracy by undemocratic means.”

In any case, the killing of Caesar in the Senate (midway through the play) is staged with utmost gravity, and the sequence -- choreographed by fight directors Rick Sordelet and Christian Kelly-Sordelet -- is quite harrowing and sobering. From this point on, a staging more true to Shakespeare’s play seems to kick in.

That said, I’m not sure the concept -- which doesn’t escape the sense of being a rather obvious gimmick -- entirely works. Shakespeare paints Caesar as a great man whose head has turned -- or is about to turn -- with delusions of grandeur. With sentiment about Trump being so strong, this ambiguity of the character is rather lost, and the play is upended in a peculiar way

The Trump scenes, in any case, elicit more “Saturday Night Live” chuckles than chilling parallels to the present administration.. 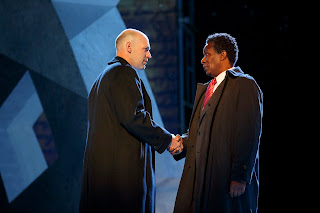 Thompson -- most adept at performing American Shakespeare -- is a magnificent Cassius, and Corey Stoll as Brutus, though less verbally dexterous, is only a degree less commanding. As the worried wives of Caesar and Brutus respectively, Tina Benko is spot-on as a Melania-accented Calpurnia and Nikki M. James is very impressive as Brutus’ wife Portia.

I was rather less enamored of Elizabeth Marvel’s Marc Antony. Fine actress that she is, I didn’t understand the concept of having her in woman’s attire, referred to by other characters as “she,” and yet still addressed as Marc Antony. Her manipulative “Friends, Romans, Countrymen” speech is well articulated with the large cast scattered all around the Delacorte as noisy rabble, but her reading struck me as rather shrill and obvious. 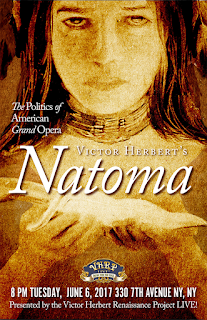 As chance would have it, two of the Big Apple’s most dedicated operetta companies -- VHRP Live! and LOONY -- presented noteworthy events just a couple of days apart from each other at the very same venue, the intimate National Opera Center on Seventh Avenue and 29th Street.

Last Tuesday, VHRP Artistic Director Alyce Mott held forth on the history of Victor Herbert’s “Natoma” (not an operetta at all, actually, but rather a work that laid claim to being the first American grand opera, and as such, quite newsworthy in its day), and the intense rivalry between opera impresario Oscar Hammerstein (grandfather of the celebrated lyricist) who headed the Manhattan Opera Center, and the management of the Metropolitan Opera. The contentious backdrop to the production of “Natoma” was arguably more dramatic than anything in “Natoma” itself. (In the event, the opera ended up being mounted under the auspices of the Philadelphia-Chicago Grand Opera.)

Mott’s compelling talk was illustrated with projections of the original production and the major players behind the scenes, while three excellent singers -- Vira Sykwotzki (Natoma), Sarah Caldwell Smith (Barbara), and Daniel Greenwood (Lt. Paul Merrill) -- were on hand to perform selections from the work, accompanied on piano  by the redoubtable William Hicks.

Mott has certainly been a passionate advocate of the work, and in 2014, presented a spectacular concert reading with an orchestra of 57, and large chorus, not commercially recorded, alas. That presentation made quite a strong case for a work which, in 1911, was greeted with some derision (especially for Joseph D. Redding stilted libretto) by the New York critics. But without an orchestra -- and Herbert’s superbly colorful orchestration -- the modest resources at hand could barely suggest the epic scope of the piece, despite the solid voices and knowing accompaniment.

Still, the history was fascinating, and Mott is a natural storyteller.

On Thursday night, LOONY offered the second edition of “My Song Goes ‘Round the World” after the Hans May song recently resurrected by tenor Jonas Kaufmann in his Sony Classical operetta disc. (The number derives from the title song of a Joseph Schmidt film from the 1930s, and made a stirring finale to the concert. Here and elsewhere, director Gary Slavin blocked his singers for maximum effectiveness. 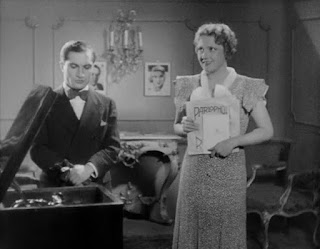 Julia Radosz, resplendent in a mustard yellow gown, got to do two of the biggest operetta lady numbers, “Meine Lippen” from Lehar’s Guiditta and “Heia, in den Bergen” from Kalman’s “Die Csardasfurstin” and she put them over with pizazz, strolling through the audience and flirting with any man within reach during the former. And she also excelled in a stylish “Someday My Heart Will Awake” from Ivor Novello’s “King’s Rhapsody.”

Baritone John Callison showed his versatility in two contrasting Noel Coward numbers, the rousing “Tokay” from “Bitter Sweet,” and then (though not exactly an operetta number) “(Don’t Put Your Daughter on the Stage) Mrs. Worthington.” Tenor Cameron Smith delivered the Richard Tauber biggie, “Dein ist mein ganzes Herz” and “Indian Love Call” (with Radosz) with distinction. And gamine-like Brooke Schooley handled the coloratura challenges of Delibes “Les Filles de Cadix” and Naughty Marietta’s “Italian Street Song” with ease. Katherine Cecelia Peck ventured into Broadway territory with “The Simple Joys of Maidenhood” from “Camelot” and then sang a heartfelt “Something Wonderful” from “The King and I,” in addition to “Youkali” from Kurt Weill’s “Marie Galante,” and "Bonne Nuit" from "Bitter Sweet."

It was good to hear that and other lesser-known numbers such as the “Valse d’Helene” from “Ordre De l’Empereur,” a 1902 opera-comique of Justin Clerice (Schooley). More rarities of that nature would have been welcome.

Producer Brian Long’s amiable free-form narration attempted to give thematic connection to each grouping of songs, though none was truly necessary. The music said it all.

Charlotte Ander and Joseph Schmidt in “My Song Goes Round the World” (1934)
Posted by Harry Forbes at 3:35 PM 0 comments