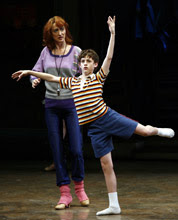 The 2000 film about a boy in a northern England mining town who, under the tutelage of a tough but empathetic teacher, discovers his talent for ballet against a backdrop of British Prime Minister Margaret Thatcher's standoff with the striking miners in 1984 has come to Broadway from London.

With three talented youngsters alternating the title role (David Alvarez, Trent Kowalik and Kiril Kulish) -- a marathon part involving strong acting, singing and all sorts of dance -- this musical directed, like the film, by Stephen Daldry, with songs by Elton John, is extremely well done, though a few caveats are in order.

Though it features an 11-year-old boy as its central character, this is not a show for young kids. The rough language of the miners and the other characters is a far cry from Disney product.

But all in all, this is a rare musical that works as both drama and spectacle. Haydn Gwynne re-creates her original role in London as the dedicated instructor; Gregory Jbara is Billy's rough-hewn dad who comes to realize the boy deserves a chance for something better, and Carole Shelley plays his dotty but smart-as-a-fox grandma.

Peter Darling's choreography is tremendous, especially the "Solidarity" number where the young ballerinas' moves are brilliantly juxtaposed against the striking miners.

Your interest in the political situation may be nil, and the Northern accents might be a challenge, but for discerning adults not offended by the very strong language, this is as good as it gets. (Imperial Theatre, 240 W. 45th St., (212) 239-6200 or Telecharge.com) Print this post
Posted by Harry Forbes at 5:09 PM