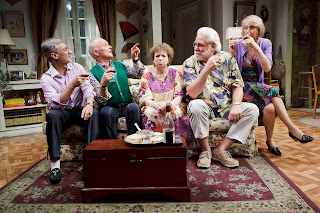 Olive (Marcia Jean Kurtz) is a crotchety old actress whose greatest fame came as the “sausage lady” in a popular TV commercial years before.

A perennial complainer about life in general and her neighbors in particular, and the sole surviving renter in her co-op, she grudgingly makes the acquaintance of the gay couple next door -- the even-tempered Robert (David Garrison) and the caustic Trey (Dan Butler) -- whose sounds and cooking smells she detests.

As with Robert and Trey, she also comes to know the co-op board chairman’s father (Richard Masur), thanks to the peace-making intervention of her cheerful, do-gooder friend Wendy (Julie Halston), a B-level theater company manager, and inveterate helper of aging actresses.

Eventually, Olive invites them all for a Passover Seder (that’s where the “bitter herbs” come in), and later, they all come over to watch Olive’s comeback part in a TV procedural.

Beyond the realistic story, playwright Charles Busch has decided to give Olive a ghost living in her ornate mirror. At first we think this may be a fancy of Olive’s faltering mind, but when, one by one, all the others see the spirit too (and know him to be a certain Howard), we realize the ghost is meant to be real.

Busch – writing in his accomplished Neil Simon manner as in “The Tale of the Allergist’s Wife” rather than his accomplished movie spoof mode (e.g. “The Divine Sister,” “Die Mommie, Die” -- has said his play is “about connecting to the people in our lives – those with us and those who have passed on” and indeed the inter-connectedness theme gets full play in the fun, if predictable and wildly improbable, climax.

Still, Busch is equally adept at writing in both a comic and sentimental vein, and Mark Brokaw expertly draws both those qualities from his cast.

Busch veteran Halston exudes great warmth throughout, and her body language – a sort of Olive Oyl come to life – is a rib-tickling pleasure to watch from start to finish. The titular Olive is intentionally unpleasant, though we’re meant to grow fonder of her as the play progresses. Kurtz excels in the unlikable aspects of the part, but her performance could have used more colors in helping convey the other.

Garrison and Butler make a well-contrasted pair, and the bear-like Masur, who ultimately serves as Olive’s love interest, is affable and appealing.

Some of the cast stumbled on their line readings – perhaps the disorienting result of Hurricane Irene a couple of days earlier – but, on the whole, the ensemble could not be faulted.

While not perhaps Busch’s very best work, as there’s a contrivance to the basic setup that makes it hard to suspend disbelief completely, “Olive and the Bitter Herbs” is never less than amusing, often laugh out-loud funny, and generally succeeds in making its touching point about our common humanity in a most entertaining way.