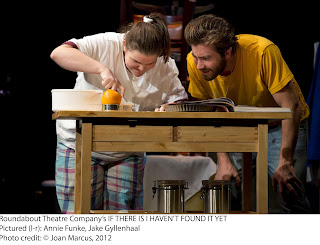 Jake Gyllenhaal, in a complete departure from anything he’s played on screen, makes an auspicious American stage debut as a scruffy Brit. He’s Terry, the wastrel uncle to an overweight 15-year-old girl, Anna (Annie Funke) whose well-intentioned parents are too self-absorbed to fully comprehend their taciturn daughter’s pain.

Gyllenhaal’s English accent never falters, and despite his character’s crude talk laced with f-bombs and wasted, rumpled appearance, he shows us Terry’s inherent decency, particularly where his lonely niece is concerned. Their scenes together are most touching. He’s not the whole show, though, as the others are equally accomplished.

The play – a hit at London’s Bush Theatre in 2009 by up-and-coming writer Nick Payne – is one of those dysfunctional family dramas that we’ve seen often enough. Critics praised it for its quirky humor, but here, under Michael Longhurst‘s direction, a tone more somber than even mordantly comedic predominates.

That quality is underscored by Beowulf Boritt’s water drenched setting – pouring rain at times, overflowing water from a bathtub during a climactic scene, and from the trough that catches the water from the flies – and ramshackle furniture roughly tossed aside piece by piece by the cast after each scene. The water and furniture rather obviously mirror the symbolism of the play: George’s fretful planetary concerns and the family’s emotional flotsam and jetsam.

Payne writes good naturalistic dialogue…but even at 95 minutes or so, I found the proceedings a bit tedious, while admiring the committed performances, and Gyllenhaal’s auspicious stateside debut.