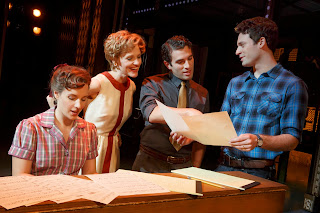 Yes, it’s a jukebox musical, and yes, the song placement is strictly of the “and then she wrote” kind, but “Beautiful” – ostensibly the life story of songwriter-turned-singer Carole King – proves more than that.

Douglas McGrath has fashioned an intelligent, often witty story of two songwriting couples – King and her husband Gerry Goffin, and their friends Cynthia Weil and Barry Mann. Yes, the story is told in broad, necessarily simplistic strokes, but the quality of the writing and the talent of the four principals makes for absorbing drama as much as a strongly melodic evening. Director Marc Bruni guides his cast through a well-paced narrative.

Weil (Anika Larsen), all tart show-biz savvy, and Mann (Jarrod Spector), womanizing nebbish who seriously falls for Weil, are the comedic sidekicks of traditional musical comedy, which is not to say that their characters, like King and Goffin, aren’t well developed with their own share of poignant moments.

As her too-good-to-be-true boyfriend, then manic-depressive, husband Goffin, Jake Epstein offers a touching, most affecting characterization.

All four sing impressively, and kudos to Brian Ronan’s sound design for a clean, natural projection.

McGrath’s story arc charts King’s reluctant emergence as a solo artist with a generous offering of the golden songs from that period.

Print this post
Posted by Harry Forbes at 7:56 PM