Cymbeline (The Public Theater’s Shakespeare in the Park) 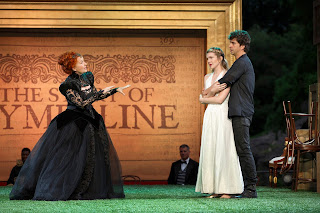 Though one of the lesser known plays of the Bard, “Cymbeline” proves a winner in Daniel Sullivan’s entertaining production now in its final week at the Delacorte.

Even if performances are relatively rare, the play is, I think, one of Shakespeare’s most interesting. I first encountered it in the excellent production in the BBC-PBS Shakespeare series back in the 1980s. Helen Mirren, at her most youthfully beautiful, was Imogen, the play’s central character (and daughter of the titular king).

Imogen’s husband Posthumus (here Hamish Linklater), an orphaned ward of the king, has been banished so that she’ll be forced to marry her scheming stepmother’s doltish son Cloten (also Linklater with a dopey blond wig). Exiled to Italy, the gullible Posthumus is made to think Imogen (Lily Rabe) has been unfaithful by the crafty Iachimo (Raul Esparza) who sneaks into Imogen’s room while she is sleeping, and takes inventory of both the room and Imogen’s partly clad body.

Upon hearing these details, Posthumus vengefully orders her murder, forcing the innocent princess to don male attire and take shelter with an elderly man Belarius (unfairly banished from Cymbeline’s court many years before) and his two sons (David Furr and Jacob Ming-Trent) who are actually the king’s children whom Belarius had kidnapped as infants, and lovingly raised as his own.

That TV production, and subsequent stage productions I’ve encountered, including an absorbing 1988 National Theatre mounting with Geraldine James and Tim Pigott-Smith (as Iachimo), took the play and its fantastical fairy tale elements quite seriously, and were all the better for it.

Sullivan’s production takes a much more lightweight approach, perhaps as befitting the Central Park summer crowd audience, but with an above average cast, many imaginative touches, engaging songs and incidental music, enough of the gravitas of the original remains to tug at the heart.

I do have one major reservation, however. Likable as Rabe is in many respects, and comfortable at speaking the Shakespearean text (albeit in a plainly American manner), I feel she misses the nobility and true purity of the character. Her delivery is far too worldly and sardonic, and at moments of high emotion, she can sound downright shrewish. Hamish Linklater rather overdoes the buffoonery as the conniving queen’s doltish son Cloten, but his interpretation is undeniably amusing. And he’s solid as Posthumus, impressing with his verbal dexterity in the speech where he rails against women after learning of Imogen’s supposed infidelity.

It’s unfortunate that the late scene wherein the god Jupiter and the spirits of Posthumus's mother and father intervene for him, has been cut, robbing his character of much of the necessary remorse and anguish over his rash deed. “She forgave him awfully fast,” one playgoer was heard to remark after the show.

Patrick Page makes a fine, well-spoken Cymbeline (not overindulging his plummy voice), and he does equally well as Posthumus’ benefactor Philario in the Roman scenes. Several others in the cast are similarly double-cast, none more spectacularly then Kate Burton who, besides playing the Queen, does a remarkable job as kindly old Belarius, grey beard and all. Steven Skybell is a very good, sympathetic Pisanio, faithful servant of Posthumus.

Raul Esparza is particularly outstanding as the oily villain, speaking the text so deftly and musically that you barely miss the traditional English accent. His lecherous ogling in Imogen’s bedchamber is superbly played.

Tom Kitt (“Next to Normal,” “If/Then”) has supplied very lovely incidental music as well as a handful of songs, including a Vegas-y opening number for Esparza, and a lovely setting of “Fear No More the Heat of the Sun” well sung by the excellent Furr and Ming-Trent.

The play ends with some very crowd-pleasing choreography, courtesy of Mimi Lieber, which sends the audience home in jovial spirits.

Kate Burton, Lily Rabe, and Hamish Linklater in The Public Theater’s Free Shakespeare in the Park production of Cymbeline, directed by Daniel Sullivan, at the Delacorte Theater in Central Park. Photo credit: Carol Rosegg.
Print this post
Posted by Harry Forbes at 9:45 AM