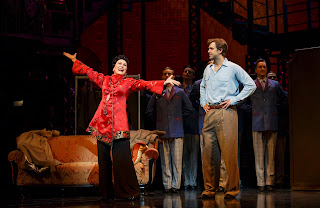 If there’s a more heart-stirring moment in modern musical theater than the one where the lighting man calls out to faded silent film star Norma Desmond upon her return to Paramount Studios after decades, “Let’s get a good look at you, Miss Desmond,” and the spotlight finds its way to the startled and deluded lady sitting in the director’s chair, as Andrew Lloyd Webber’s music swells majestically, I can’t offhand think of it.

Glenn Close, who originated her Tony-winning role of Norma Desmond nearly 20 years ago on Broadway, is back, and as you may have heard, she’s as electrifying as she was two decades ago. The singing voice may be at times less assured, but it scarcely matters, as everything else is spot-on. She’s joined by three of her London co-stars, all Brits, though you’d never know it by their authentic Yankee accents: Michael Xavier is Joe, the writer whom Norma entices into her spider’s web to edit her unwieldy script for a new version of the Salome tale; Fred Johanson as the ever-protective butler Max, and Siobhan Dillon as Betty, the young studio assistant who tries to set Joe on course again as a serious screenplay writer and falls in love with him in the process.

“Sunset Boulevard” is as much Joe’s story as Norma’s, and he has the lion’s share of stage time, so the casting of that role is key. And having seen many Joe’s in my time, I can authoritatively say Xavier is one of the very best.

Gone in this production is the massive mansion set that rose and fell so impressively, to make way for the 40-piece orchestra now sharing space with the cast and scenery on stage. But James Noone’s set design is still reasonably eye-filling, and though Norma’s sweeping staircase is gone, there are still plenty of steps to bother Close’s kneecaps as she ascends to the upper platform levels.

The large orchestra (claimed to be the largest on Broadway in 80 years!) makes Lloyd Webber’s often lush music – particularly the noirish Old Hollywood motif that opens the show and returns throughout -- all the more engulfing.

Tracey Christensen’s costumes are colorful and apt, but Close’s eye-popping duds are still the ones designed for her originally by Anthony Powell. Close’s wig designs (by Andrew Simonin) are different here than before, but suit her current visage. Stephen Mear’s choreography enlivens some of Lloyd Webber’s more prosaic stretches of music such as the “Let’s Have Lunch” sequence and New Year’s Eve party at Joe’s friend Artie’s place.

In most respects, though, Lloyd Webber’s score is top-drawer. “With One Look,” “Salome,” “The Greatest Star of All,” “New Ways to Dream,” “The Perfect Year,” “As If We Never Said Goodbye,” “Too Much in Love to Care,” and the title song are all strong, and have an evergreen quality.

Price has come up with some ingenious business for this elaborate concert reading as, for instance, actors holding headlights to simulate a car chase.

All these years later, Close still stands tall among all the great women who have played the part. Patti LuPone famously originated Norma first at Lloyd Webber’s preview performance at the Sydmonton festival, and later in London’s West End. A bootleg video of the former shows LuPone in impressive form. One can see why she landed the part after that high-profile tryout. But by the time she got to London, her interpretation had, I think, coarsened, and I didn’t find her too convincing as a grand star of yesteryear.

In all fairness, though, LuPone didn’t have the advantage of Nunn’s subsequent revisions for Close (and the other Broadway and West End stars who followed) which cast them all in rather a more impressive light.

Betty Buckley was acclaimed for her well-sung and sensitively acted Norma, though I found her interpretation a tad too much on the dour side. Diminutive Elaine Paige was excellent, with plenty of voice and much of Close’s dramatic flair. Petula Clark – who, as far as I know, still holds the record for most performances after her long runs in London and U.S. tour -- was also outstanding vocally and dramatically, playing up the American accent more than others, and emoting impressively in the overwrought final scenes. Rita Moreno, a brief London replacement, hadn’t quite settled into the role or mastered her lines when I caught her performance, but showed promise. And Close’s original Broadway understudy, Karen Mason, was very good indeed. (Close’s understudy on this occasion is the estimable Nancy Anderson who also has some choice bits as part of the ensemble. It would be fascinating to see what she does with the part, if she ever gets the chance.)

Though older than Norma’s stated 50 years – the film’s Gloria Swanson was also 50 – Close more than pulls it off, as did several of the ladies mentioned earlier for that matter. And this isn’t just campy scenery chewing; she creates a genuinely pathetic creature with many telling, sensitive moments.

The audience wildly cheered her every big moment, after both the songs and many of the iconic lines. The tumultuous ovations for Close's three solo curtain calls at the end might have rivalled those accorded Maria Callas in her heyday. Or so it seemed.

The originally announced 16-week run has already been extended through June 25.

Photo by Joan Marcus: Glenn Close and Michael Xavier in SUNSET BOULEVARD
Print this post
Posted by Harry Forbes at 5:51 AM