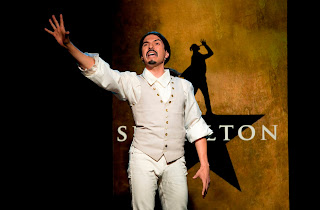 I’m a bit late in catching up with this highly amusing spoof of the phenomenal megahit “Hamilton,” the brainchild of “Forbidden Broadway” creator Gerard Alessandrini. Friends and colleagues told me the laughed themselves silly and that I’d no doubt do the same, a sometimes risky endorsement leading to letdown. But, indeed, “Spamilton” -- which I caught as its run was winding down at the Triad -- is a hoot.

It has since relocated to the theater district, not far from its satirical target.

The show is really an extended “Forbidden Broadway” -- with its barbs extending far beyond solely “Hamilton,” its memorable cast members (Daveed Diggs, Leslie Odum, and Renee Elise Goldsberry in particular), and of coure, creator Lin-Manuel Miranda.

Throughout the evening, Alessandrini knocks the rap elements of the show, the over-complexity of the plot, and (very gently) the ego of its star, but along the way, he works in such conceits as a critical Stephen Sondheim whose words are, in essence, no less dense (“No One Will Listen” is the droll parody); an old school Liza Minnelli (“Down with Rap”), and the unprecedented expense of the tickets (“Sweeney Todd’s” beggar woman crying for tickets not alms). There is, I gather, additional material added to the show which officially opens at its new home on June 19.

The big hits from “Hamilton” get a lyrical reworking: “I Am Not Going to Let Broadway Rot,” “I Want to be in the Film When It Happens,” “What did you Miss?” and “Look Around.”

Liza, Barbra, and Glenn make cameo appearances (at my performance, in the person of “Forbidden Broadway” veteran Gina Kreiezmar), and there’s also  Audra, Stokes, and Mixtape wanna be’s JLo, Gloria Estefan, and Beyonce, all craving to get into the act.

The cast -- led by Dan Rosales as Miranda -- is supremely talented. Tristan J. Shuler as Daveed Diggs, Chris Anthony Giles as Leslie Odum, Jr., Larry Owens as Sondheim & Little Orphan Annie (don’t ask), and Nicole Ortiz as Renee Elise Goldsberry  and, like her co-stars, many other performers. Glenn Bassett, like Ms. Kreiezmar, is billed as guest artist, and he channels Jonathan Groff as the King, and shows up in other roles, too.The cast really gets a workout during the 90 minute intermission-less show, accompanied by Fred Barton on piano, with nifty, energetic choreography by Gerry McIntyre. Dustin Cross’ parodistic costumes add to the fun.

Photo by Carol Rosegg: Dan Rosales in a scene from "Spamilton" at the Triad Print this post
Posted by Harry Forbes at 4:49 PM