The Kite Runner (The Hayes Theater) 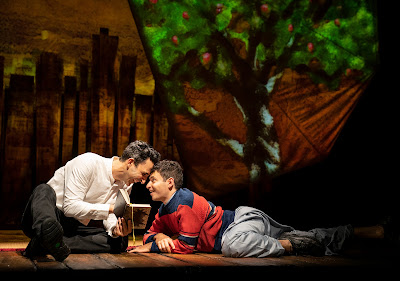 This stage adaptation of Khaled Hosseini's 2003 international bestseller, made into a film in 2007, premiered back in 2009 at the San Jose Repertory Theatre, and has finally made it to Broadway via the U.K.’s Nottingham Playhouse in 2013, and Wyndham’s Theatre in the West End in 2016.

Amir Arison from TV’s “The Blacklist”  plays the tale’s protagonist, aptly named Amir, and quite a marathon part it is. On stage almost every minute of the show’s two-and-a-half hours, Arison narrates the tale and evolves from naive12-year-old boy to responsible manhood.

Though some have criticized the play for being so narrative heavy, I was engrossed throughout. And those at my performance were similarly transfixed. It was that "hear-a-pin-drop" concentration that signals an absolutely rapt audience.

As Amir begins his saga with his privileged childhood in Kabul and the happy times -- kite flying among the pastimes -- spent with his best friend Hassan (Eric Sirakian, very touching), son of the devoted manservant Ali (Evan Zes) to Amir’s wealthy widowed father Baba (Faran Tahir). The boys are inseparable but the inherent class distinction -- Amir a privileged Pashtun, and illiterate Hassan the lower class Hazara -- is never forgotten in Amir’s mind.

When the steadfastly loyal Hassan attempts to retrieve a downed kite for Amir after the local competition, he encounters the local bully Assef (Amir Malaklou), and he is set upon and sexually assaulted. Amir fearfully watches everything from a hidden position and, shamefully, does nothing to help the boy. This cowardly act, and several others that follow, haunt Amir ever after and propels the action.

Years later, after the Soviet takeover of Afghanistan, Amir and his father flee to San Francisco. There, Amir falls in love with Soraya (warmly sympathetic Azita Ghanizada), daughter of one of Baba’s formerly powerful friends, General Taheri (Houshang Touzie), now a flea market stall proprietor. Eventually, a message from a longtime family friend, Rahim (Dariush Kashani), now in Pakistan, brings Amir back to Afghanistan to make amends for his youthful misdeeds.

The performances are all excellent, and Arison, in addition to demonstrating his remarkable stamina, helps us understand his character’s less-than-admirable qualities, making his ultimate redemption all the more moving. Tahir is very strong as the stern but loving father. And Kashani impresses with his multiple roles besides that of Rahim.

Playwright Matthew Spangler has skillfully adapted Hosseini’s book, and thanks to the storytelling structure, manages to cram plenty of incident into it.

Despite the protracted road to Broadway, there’s nothing tired about this vibrant and absorbing production which I warmly recommend.

Print this post
Posted by Harry Forbes at 6:46 AM