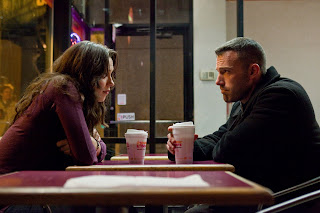 Ben Affleck returns to the same gritty Boston milieu with which he found success as a director in 2007’s “Gone Baby Gone” in “The Town,” a gripping action-drama and love story.

This time he also plays the lead, and he impresses mightily on both counts, much like Clint Eastwood whose mantle Affleck seems poised to inherit.

He plays Doug MacRay, the leader of a gang of bank robbers from Boston’s notorious Charlestown neighborhood which, we are told, has spawned more bank and armored car robbers than anywhere in the country. In the opening scenes, he and his partner and closest friend, Jem (Jeremy Renner from “The Hurt Locker”) and their accomplices break into a bank disguised in skeleton suits, terrorize the workers and leave with cash and the bank manager Claire (an especially fine Rebecca Hall) as temporary hostage, though they soon set her free.

Later, loose canon Jem learns Claire lives nearby and fears she may finger them and suggests he might permanently silence her, so Doug – not wanting to add murder to their crimes -- contrives to watch her himself. In short order they fall in love, and Doug sees a way out of his dead-end life, and the chance he blew years before when he was a promising hockey player.

Meanwhile, the gang is pursued by FBI agent Frawley (Jon Hamm) who, though he knows the identities of the masked criminals repeatedly fails to nail them.

The sharp script, co-written by Peter Craig, Affleck, and Aaron Stockard was based on Chuck Hogan’s 2004 novel, “Prince of Thieves.” Affleck filmed the story on location with locals taking parts, but the authenticity of the entire cast is most impressive.

There are many compelling scenes including one almost worthy of Hitchcock in which Jem happens upon Doug and Claire at an outdoor café and learns that Doug has been secretly dating her. But Doug knows that Claire saw Jem’s tattoo on the back of his neck during the robbery, and worries that if Jem turns his head, Claire will see it.

The relationship between Doug and Claire is beautifully limned by Affleck and Hall, though the love story aspects are balanced by the extremely violent – but not, I think, gratuitous -- heist scenes.

Renner, a sort of modern-day James Cagney, makes a compelling counterpart for Affleck. His Jem has served nine years in prison and is determined never to go back. He’s like a brother to Doug, further bound to him by Doug’s off-again, on-again relationship with his sister Krista (Blake Lively) who holds a torch for Doug.

Hamm gives a polished performance as the relentless agent, though perhaps through no fault of his own, it’s difficult to forget his “Mad Men” character, Don Draper. Chris Cooper is marvelous as Doug’s father, doing time at Walpole’s maximum security prison. He has only has one scene, but he makes it count. And Pete Postlethwaite is aptly frightening as a crime kingpin with a florist business.

The action scenes – car chases through the Beantown streets, shootouts, narrow escapes – are all excitingly done, but it’s the human story that stays with you after.

“No matter how much you change, you still have to pay the price for what you’ve done” someone says late in the film, underscoring the movie's redemptive theme. But "The Town" is as much about the validation of Ben Affleck’s impressive talent as that of the character he so memorably portrays here.

(The film has been rated R by the MPAA for strong violence, pervasive language, some sexuality and drug use.) Print this post
Posted by Harry Forbes at 7:46 PM