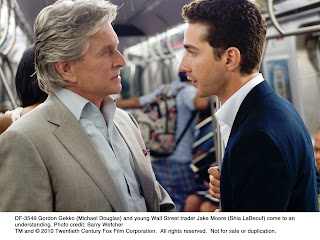 At the start of Oliver Stone’s sequel to his 1987 “Wall Street,” Michael Douglas’ Gordon Gekko is being released from prison in 2001 having served eight years time for securities fraud and insider trading. Fast forward to 2008, and a variant of his iconic motto from the first film -- “greed is good” -- is now the subject of a best-selling book, "Is Greed Good?"

But Gekko is no longer a player in the financial system that brought him down. When young proprietary trader Jake Moore (Shia LaBeouf) -- who just happens to be dating Gekko’s estranged daughter Winnie (Carey Mulligan) -- turns to Gekko for guidance, after the death of Jake’s boss and mentor Louis Zabel (Frank Langella), Gekko agrees to help Jake.

In return, he wants Jake to help bring about a rapprochement with Winnie who blames her father for the death of her brother. Having turned her back on her father’s world, she works as a reporter for a leftist Web site. Though Jake is, of course, in the same business as Gekko, what compensates in Winnie’s eyes is Jake’s genuine zeal for alternative energy.

Jake is wooed by ruthless investment banker Bretton James (James Brolin) whose machinations led to the plummeting of stocks of Keller Zabel Investments and subsequent easy takeover by the investment bank Churchill Schwartz of which James is a partner.

Nonetheless, Jake allows himself to be momentarily swayed from his course of vengeance on James whom he holds responsible for Zabel's death, and joins James’ team. Meanwhile, you just know Gekko is planning to get back to his power broker position.

Douglas gives another dynamic performance, even if this is a mellower – and, in some respects, nicer -- Gekko than in the first film. LaBeouf makes an empathetic protagonist and we follow the events of the film through his eyes. Mulligan – channeling Samantha Morton’s brand of moist vulnerability – shows another facet of her talent after her Oscar-nominated turn in “An Education” with a plausible American accent, too.

Brolin – his second film of the week (after Woody Allen’s “You Will Meet a Tall Dark Stranger”) – skillfully blends charm and ruthlessness.

Allan Loeb and Stephen Schiff’s script includes references to the banking crisis of a couple of years ago, the results of deregulation, but it’s the human dynamic among Gekko, Winnie and Jake that predominates.

This is one of those films where New York looks absolutely splendid, the Metropolitan Museum of Art, Central Park Zoo, and iconic skyline really sparkling.

(The film is rated PG-13 for brief strong language and thematic elements.) Print this post
Posted by Harry Forbes at 6:10 PM