The Importance of Being Earnest (Roundabout Theatre Company) 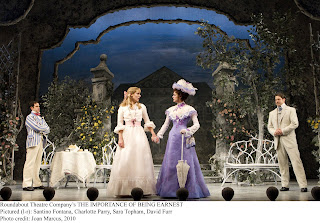 Brian Bedford’s production of Oscar Wilde’s most enduring play is a winner in all departments, and ranks as one of the work's most satisfying revivals in recent times. I don’t believe I’ve ever seen a finer production. Don’t be tempted to dismiss the Roundabout’s staging as just “another ‘Earnest,’” for it is one of the first order, a delight from start to finish.

Desmond Heeley’s sumptuous sets and costumes signal a classy production, as indeed it is, with the cast to a person matching the visual delights.

Bedford himself is a delicious Lady Bracknell, playing it straight (as it were) with dry, understated readings that owe nothing to Edith Evans indelible portrayal immortalized in the classic film. His exclamation about the handbag, and his accusatory call for “Prism” are all his own, and as rib-tickling funny as they’ve ever been.

The incredibly versatile Santino Fontana, happily recovered from the injury that necessitated his dropping out of “A View from the Bridge” during previews, make a delightfully campy Algernon, the polar opposite of his Drama Desk-winning turn in "Brighton Beach Memoirs."

David Furr as his older friend Jack, who falls for Algernon’s ward Cecily, is well contrasted, a straight man to the impish Algy, but every bit as much the mischievous bachelor.

Sara Topham and Charlotte Parry as Gwendolen and Cecily respectively, the former grandly arch, the latter not half so demure as her tutor Miss Prism thinks. Their second act bitch fest with each thinking she is courting the same man, as the men have each claimed to be called Ernest, is played to the hilt.

Dana Ivey as Cecily’s not-so-prim tutor with a romantic hankering for the Rev. Chasuble played by Paxton Whitehead as the clueless Rev. Chasuble also offer gems of characterization.

Bedford directs the whole with just the right tone of absolute sincerity, as it should be, with the comedy emerging all the droller for it.