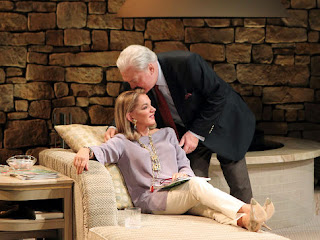 Jon Robin Baitz’s “Other Desert Cities” is being heralded as the great American drama of the day in some quarters. In truth, while it is indeed a literate and often witty work – and you won’t see better performances in town than those offered by the five superlative actors who comprise the cast – I felt it doesn’t quite live up to all the huzzahs.

Never could I really lose myself in the domestic situation on view, though what transpires would only seem to be an allegory for a country in the grip of fear during the Bush administration.

What's on the surface is Brooke (Elizabeth Marvel), the emotionally troubled daughter of an old-guard Republican Palm Springs couple Polly and Lyman Wyeth (Stockard Channing and Stacy Keach). She’s a former screenplay writer, he an actor-turned G.O.P. ambassador. Both were intimates of the Reagans.

Brooke – divorced and recently recovered from a nervous breakdown -- has, she reveals, written a memoir about the suicide of her radicalized brother after he was party to a deadly bombing. On the occasion of a Christmas Eve gathering, circa 2004,she's hoping to get her parents' blessing. Knopf is already contracted to print it, and the New Yorker magazine is set to run an excerpt the following month. The revelation is met with shock, astonishment, and ultimately, anger by Polly and Lyman.

Joe Mantello’s direction is all one could wish, drawing your attention to the detailed actions of each of his virtuoso players moment by moment. But the artifice of the setup is always apparent – or so it seemed to me -- and after a while, the bickering about whether Brooke should or should not publish her book, seems trivial and grows tiresome, even though capped with a satisfying, if melodramatic, twist.

Playing the loving but all-controlling matriarch, Channing delivers one of her very finest performances, and she knocks her stinging lines right out of the park even time. Keach is also superb, effortlessly inhabiting his authoritative role, and believably cracking under the strain of the situation. Lavin makes Silda a touching creature, both vulnerable and wise. Marvel shows the hurt that drives Brooke to betray the family’s secrets, while Sadoski skillfully shows the myriad layers beneath the unflappable exterior.

These performances and Baitz’s smart dialogue, stagy though it may be, are enormously enjoyable, even if the matter at hand is less than profound.