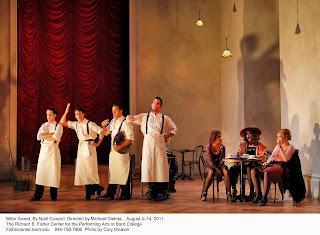 One’s joy that someone finally had the good sense to mount Noel Coward’s musical masterpiece – his glorious operetta “Bitter Sweet” from 1929 – was, as it happened, seriously undermined by a minimalist, avant-garde staging that, while faithful to the essentials, was so stylized that it emerged far removed from the spirit of the original.

If this were an oft-revived work, such as one of Gilbert and Sullivan’s chestnuts, perhaps a novel approach could be tolerated. But as so many in the audience, judging by the pre-performance chatter, were anxious finally to see a legendary show they had heard much about but never actually encountered, it seemed a shame not to have rewarded their curiosity with a traditional staging.

Rather than following the script’s time frame of an old woman reminiscing in the 1920’s on the great tragic romance of her life in 1875, this production began in 1969, and traveled back to 1920, a conceit which, in many respects, worked against many elements of the period-specific text.

The story centers on Sarah Millick, a well-to-do young Englishwoman who elopes with her Austrian piano teacher Carl Linden, on the eve of her marriage to a stuffy young man. In Vienna she and Carl live in relative penury, he working as a pianist at Herr Schlick’s Café, she as one of the establishment’s dancing partners for the patrons. When a military officer presses himself on Sarah (now Sari), Carl jumps to her defense and is killed in a duel.

Normally, the actress playing Sarah gets to demonstrate her versatility, first as the wise old woman, then an ardent young girl of 16, then a poised middle-aged widow, and, finally, back to the present, as her elderly self again. Here, unaccountably, the part of the older Sarah (now Lady Shayne) was given to the great British actress Sian Phillips. Delightful as it was to see her here, the double-casting was wrong, but director Michael Gieleta seemed intent on imposing a “Follies”-like structure on the show with the young Sarah interacting across the decades with her older self.

Other ghostly effects were conveyed by Christopher Akerlind’s lighting which cast dark shadows on the wall to remind us, presumably, that this was all a flashback, an effect more creepy than evocative.

The younger Sarah was played by Sarah Miller, who sang well, although her mezzo timbre gave her songs a more covered quality than the bright, open sound the part ideally requires, and handled her line readings intelligently, affecting – like the rest of the cast – a decent English accent. But, somehow, she lacked the indefinable luminosity that a leading role such as this absolutely demands. And, sorry to say, she was saddled throughout with an unfortunate hairstyle.

Phillips appropriated what should have been Miller’s opening declaration to follow one’s heart, “The Call of Life,” and rendered it in an accomplished speak-sing manner rather than with the soaring lines the score requires. Phillips also opened the second act with an artfully studied reading of “Zigeuner,” but Miller at least got to sing that song in full near the end of the show.

There wasn’t any particular chemistry between Miller and her leading man, William Ferguson, but his gleaming tenor was outstanding, and he played with a charming Viennese accent, something of a novelty since most of the Carl Lindens on LP were Italian tenors.

Also standing tall in the cast was Amanda Squitteri as Manon, the entertainer at Schlick’s Café. She milked her big number, “If Love Were All,” for all it was worth, singing superbly and playing the vivacious star with great style that compared favorably with that of the incomparable Ivy St. Helier, the part’s originator, who memorably recreated her role in the 1933 film version.

James Bagwell conducted Jack Parton’s mercifully traditional arrangements with style. If one closed ones eyes during the songs, one almost could pretend this was an authentic presentation. But there was no overture, the extended musical set pieces were truncated, and most of the ensemble sections were sacrificed for a “chamber opera” effect. Even Sarah’s glorious “Tell Me What is Love” was shorn of most of the chorus’s response which is what really makes the number click. The opening party, the café, and Lord Shayne’s house all looked sadly underpopulated.

I didn’t care for the setting of the satiric “Green Carnations,” Coward’s paean to the gay young men of the day, as a cabaret number in Schlick’s café. And surely the saucy “Ladies of the Town” in this café were far too vulgar. Gieleta staged them as if this were the Kit Kat Klub from “Cabaret,” with a decadence that was not what Coward had in mind.

Dialogue was overly deliberate, and often had a hollow ring in the exceedingly spare setting. There was little sense of fun or gaiety. Apart from the café numbers, there was little dancing, and a dour mood pervaded all.

In his New York Times review of Florenz Ziegfeld’s original Broadway production, Brooks Atkinson wrote admiringly, “It is a production composed of miniatures, each one neatly turned. It is charming; it is subtle and witty.” You’d be hard pressed to glean those qualities from the directorial choices here, more suitable to Pirandello or “Wozzeck.”

Atkinson also called the show “decorous entertainment, reveling in the billowing costumes of a grandiose age of style, and courting humor in the bouncing bustle.” Gregory Gale’s costumes here -- though attractive in their way – couldn’t hope to be as picturesque.

Adrian W. Jones’ high-walled set, with its tall glass doors, evoked photographs of the original production. The substitution of a crimson curtain in place of the doors and the inclusion of a crescent-shaped little stage allowed a nice transformation into the café.

Still and all, misguided though the concept was, the production offered a chance to hear most of Coward’s evergreen songs performed live in something akin to their original context, generally strongly vocalized and played, and with Phillips adding a classy authenticity, however superfluous, to her inauthentic role.

Search online on YouTube for the priceless Pathe footage of the original London production (nearly 30 minutes worth, although silent) to see how “Bitter Sweet” ought to be done.