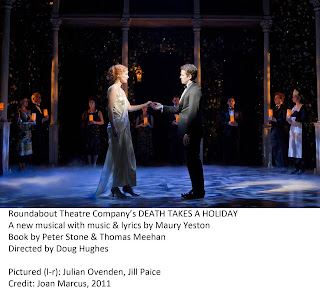 This handsome and generally involving musical from composer/lyricist Maury Yeston and book writers, the late Peter Stone and Thomas Meehan, has a number of good things going for it.

It’s based on a once-popular play by Alberto Casella, adapted originally by Walter Ferris, (and later filmed to general acclaim with Fredric March and then again with Brad Pitt as “Meet Joe Black”), and thus it’s nice to have the property back on the boards in any form. It’s composer Yeston’s first major New York score since 1997‘s “Titanic.” It’s been cast with blue-chip actors. All the technical elements are first-rate. And it’s nicely directed by Doug Hughes in his first musical outing.

It could still use more fine-tuning, and there are some less-than-scintillating patches, but the production bespeaks quality. And the narrative holds one’s attention.

The setting is an Italian villa, post-World War I. In the opening scene, heroine Grazia (Jill Paice) and her cronies are driving along the road after a party. They crash, she’s thrown from the car. and by any rights, should have died. But Death, in the handsome person of Kevin Earley, has become smitten with this effervescent creature, and for the first time, he allows one of his intended targets to emerge unscathed.

In short order, he turns up at he home of her parents, the Duke and Duchess (Michael Siberry and Rebecca Luker), and though the Duke know who he is, Death insists he be allowed to stay the weekend incognito, and that the Duke must keep mum about his true identity. In this way, Death can learn what it’s like to be human and experience the thing called love which he’s heard so much about.

In his guise as a charming Russian prince, he sets about romancing Grazia who, before long, breaks off her engagement to her sour, heavy-drinking fiancé Corrado (Max Von Essen).

There’s also a doctor (the suavely charming Simon Jones), once engaged to Grazia’s now-dotty but ultimately wise grandmother (also outstanding Linda Balgord) who continues to mistake him for her late husband, lovelorn Daisy (Alexandra Socha) who sets her cap on Grazia’s castoff lover, and flapper Alice (Mara Davi), who had been married to Grazia’s late brother who died in the war, and who tries to seduce Death with Yeston’s liveliest number, “Shimmy Like They Do in Paree.”

Except for the majordomo (Don Stephenson), the sulky Corrado and Daisy’s pilot brother (Matt Cavenaugh) who has special reason to distrust this “prince,” everyone falls for Death’s ruse, and finds him perfectly charming.

The cast is uniformly excellent. I was disappointed not to have seen Death played by that excellent British actor and singer Julian Ovenden who was felled by laryngitis after opening night, but his replacement Earley is unquestionably a first-rate vocal replacement. His smooth manly baritone makes a nice contrast to all those “Les Miz” high tenors so prevalent in pop opera musicals today.

Yeston’s score sounds quite nice on first hearing (and I have a hunch will improve upon repeated plays of the forthcoming CD). The songs bear the stamp of his trademark romanticism, almost operetta-like at times, sounding to my ears more like “Titanic” than “Nine.” Among the standouts are Luker’s lovely “Losing Roberto” and the female trio, “Finally to Know,” and Death’s 11 o’clock number, “I Thought That I Could Live,” powerfully delivered by Earley.

There’s something of an inconsistency of the tone of the book, the bittersweet romantic quality sitting uneasily beside some tiresome comic bits, but I don’t know how much of that is true of the source material or the work of Stone and Meehan.