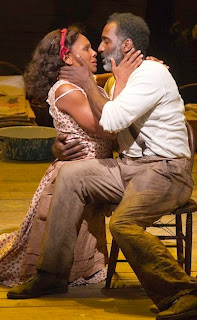 First things first. This production, which hailed from the American Repertory Theater, is no desecration of DuBose Dorothy Heyward and George and Ira Gershwin’s masterpiece. Despite some patronizing comments from director Diane Paulus and adapters Suzan-Lori Parks and Diedre L. Murray prior to Broadway that indicated the work needed fixing – comments that drew ire from Stephen Sondheim and others – this is very much the “Porgy and Bess” we all know and love.

And despite streamlining, at two and a half hours, it is a satisfyingly full evening and hardly feels like a Reader’s Digest version by any means.

Paulus has, in fact, done a superb job of giving the drama sharp focus, and she’s been aided by a uniformly excellent cast.

Audra McDonald’s Bess – finely characterized and sung as it is – does not blow away Norm Lewis’ grey-bearded Porgy, nor anyone else on stage for that matter.

David Alan Grier reveals a strong voice, and registers as one of the best Sporting Life’s within memory. Natasha Yvette Williams’ amusingly gruff Mariah is a constant delight, and her “I Hates Your Strutting Style” putdown of the drug-pushing Sporting Life is a little show-stopper in itself. Nikki Renée Daniels’ Clara offers as sweet a “Summertime” as I’ve ever heard in the show’s opening moments. And Bryonia Marie Parham’s Serena gives full measure to “My Man’s Gone Now.”

The supporting men hold up their end, too, with powerful work from Joshua Henry’s Jake, Nathaniel Stampley’s Robbins, and Phillip Boykin’s scary Crown.

McDonald acts up a storm as Bess, playing her as a damaged (literally as per the scar on her cheek) as well as emotionally. Though not as innately sexy as some past interpreters, she certainly plays up the sexuality in her first scenes, and then transforms most affectingly once she moves in with the crippled Porgy after her lover Crown commits murder and must go undercover.

When Crown surprises her at the picnic and virtually rapes her, she succumbs with graphic abandon. And, near the end, when she falls under Sporting Life’s sway, she becomes a pathetic creature again, hungrily sniffing the cocaine on the ground.

Lewis is a pillar of strength, and though Porgy’s lost his cart in this production, Lewis’s twisted legs make him as “crippled” as the character needs to be. He and McDonald make beautiful music together, slipping into the numbers, like the rest of the cast, as naturalistically as possible.

This is probably the dancingist “Porgy and Bess”you’ve ever seen, and Ronald K. Brown’s choreography is tasteful and satisfying throughout.

Purists may rankle at re-orchestrating Gershwin, but William David Brohn and Christopher Jahnke’s adaptation sounds just fine to me. There’s a new Broadway-style overture, and a couple of numbers such as “I Got Plenty of Nothing” and “It Ain’t Necessarily So” have a slightly more pop inflection, but not egregiously so.

This Broadway-style adaptation is miles better than Trevor Nunn’s West End version a few years ago, which played well dramatically, but was musically undernourished.