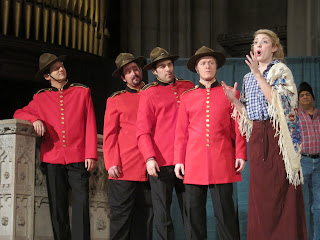 The Light Opera of New York launched its third full season of staged operettas with as ambitious a piece as they’ve attempted so far: one of the megahits of the 1920’s, “Rose-Marie,” a once ground-breaking operetta set against the novel backdrop of the Canadian Rockies. The show – with its music by Rudolf Friml and Herbert Stothart, and book and lyrics by Otto Harbach and Oscar Hammerstein II -- was a “Phantom of the Opera”-like phenomenon in its day.

The titular heroine (Julie Anne Hamula) loves miner Jim Kenyon (Daniel Greenwood). But her brother Emile Steve Gokool) wants her to marry the smarmy, well-to-do business man Hawley (Evan Alboum) who has secretly been carrying on with Wanda (Kirsten Kane), wife of the crooked Indian Black Eagle (Matt Elizondo). There’s also Sergeant Malone, the Mountie who loves Lady Jane (Sarah Bleasdale), the good-egg proprietress of the local hotel, who’s also being pursued by Kenyon’s milquetoast sidekick Herman (David Macaluso). Along the way, Black Eagle is murdered, and Kenyon’s the suspected killer, driving the disillusioned Rose-Marie to think she might marry Hawley after all.

Part of what made the piece so innovative, besides the setting and atypical murder theme, was its generous underscoring intended to effect a seamless whole, so much so that co-librettist Hammerstein requested that individual song titles not be included in the program.

Under music director James Bittlecome, the ensemble of six musicians (piano and five strings) played many of the melodrames which gave the flavor of the piece, though ideally of course, one would hope for a more robust sound for such a full-blooded score than even an accomplished salon ensemble could produce.

The cast possessed uniformly excellent voices, if not necessarily cast to type. Kane and Hamula, for instance, towered over Alboum‘s Hawley an unlikely rival for Kenyon, requiring a serious suspension of disbelief.

Greenwood sang the hero role with firm, well-rounded tone. Gomez gave a good account of the rousing Mounties number, and Gokool sounded strong in his brief singing bits, but dramatically, the males in the cast were on the stiff side (or perhaps just under-rehearsed).

Macaluso’s Herman was anything but stiff, though I’m not sure he quite conquered the shortcomings of the part, despite channeling, in turn, Nathan Lane, Bert Lahr, and Groucho Marx.

Bleasdale, resembling Carol Burnett, may not have been totally convincing, but she and Macaluso enlivened all their scenes, within the limits of their often hokey comic material. She was also given Rose-Marie’s vocal part of the third act “Minuet of the Minute” duet with Herman, and did well by it.

As for Rose-Marie, Hamula – fresh from her outstanding performance in Ralph Vaughan Williams’ light opera “The Poisoned Kiss” for Bronx Opera – made a strong-voiced heroine, with a capable French-Canadian accent. She and Greenwood blended beautifully in the iconic “Indian Love Call.”

Adapter Alyce Mott mercifully trimmed what she could of the original book.

When one considers the original Broadway production had no less than 75 chorus girls stopping the show with the Indian-flavored “Totem Tom-Tom” (a tad more modestly staged here!), it must be acknowledged that Gary Slavin directed the forces at his disposal resourcefully. And LOONY’s chorus of eight still works wonders.

The costumes on this occasion were rather drab (partly due to the outdoorsy locale, partly not), and in some cases, ill-fitting, but one makes allowances.

LOONY is to be commended for using some discreet miking for the first time, which greatly improved audibility in their overly reverberant playing space, and made for a more involving experience all around.

Village Light Opera Group once mounted a very fine version with full orchestra, and Light Opera of Manhattan (LOOM) performed the work capably several times with their usual piano accompaniment. But “Rose-Marie” is a rarity these days, so it was good to encounter it again in such a well sung performance which also afforded the chance of hearing such rarely recorded numbers as the tuneful opening chorus and the comic trio “Only a Kiss,” entertainingly delivered by Bleasdale, Macaluso, and Gomez.

At the start of “Indian Love Call,” the couple in front of me gazed at each other with fond recognition of the tune and perhaps something more. So it seems Friml’s immortal melodies can still cast their spell.