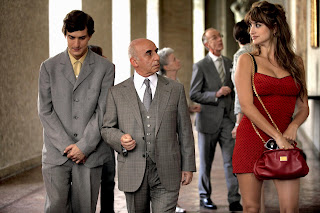 Woody Allen raised his own bar with “Midnight in Paris,” and some have judged his latest as less good, but in my opinion, not so. This multi-strand story – a sort of homage to the Italian anthology films of the 1950s and 1960s where directors like Fellini or De Sica would contribute part or all of the vignettes in a particular film – is mostly a delight.

Unlike those native precursors, Allen’s four stories are interwoven. There’s American tourist Holly (Alison Pill) who falls for a lawyer. When Holly’s parents (Allen himself and Judy Davis) come over to meet their daughter’s fiancé (Flavio Parenti), her opera-directing father discovers that the fiance’s father (Fabio Armilato) has a beautiful tenor, but (here’s the rub) only when he sings in the shower.

Architect John (Alec Baldwin) tries to locate the neighborhood he lived in as a youth, and discovers a version of his younger-self (Jesse Eisenberg) in love with fellow student Sally (Gerta Gerwig), and tempted to stray by Sally’s treacherous best friend (Ellen Page) visiting from the States.

In the most farcical piece, Milly (Alessandra Mastronardi), wife of Antonio (Alessandro Tiberi) falls for a lecherous matinee idol (Antonio Albanese), while the former finds himself involved with a sexy call-girl (Penelope Cruz) who mistakenly shows up at his door.

And, in the most surreal, satiric episode, an office worker (winningly played by Roberto Benigni) suddenly becomes famous for no reason at all.

Thanks to Darius Khondji’s lensing, Rome looks as delectable as Paris did in the last film. Performances are all very good, even if Page is an odd choice as a seductress. And Allen is much better here than in his last on-screen role in “Scoop.”

(“To Rome With Love” is rated R by the MPAA for some sexual references.)
Print this post
Posted by Harry Forbes at 3:57 PM