Closer Than Ever (York Theatre Company) 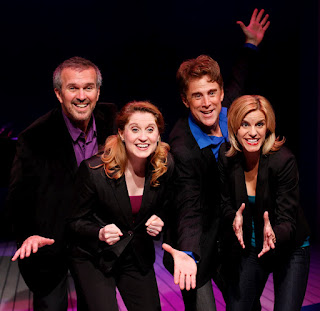 Attractively designed by York’s Producing Artistic Director James Morgan – white doors and floor against sky blue walls – and with musical direction in the sensitive hands of Andrew Gerle, the score – one amusingly or poignantly perceptive song about love, relationships, family, and life choices following another – holds up exceedingly well, helped along by some subtle updating by Maltby who also directs.

Among the minor deletions is the song about Musak, which was apparently beyond amending, though the physical fitness number (“There’s Nothing Like It”) remains, with its rather tired references to Jane Fonda videos.

The original cast – Brent Barrett, Sally Mayes, Richard Muenz, and Lynne Wintersteller – was pretty special, but this cast measures up. Voices are unamplified in the intimate venue, which is mostly a plus, though some of Maltby’s lyrics would have landed with more of a punch with some discreet miking. All four make a beautiful blend in the various combinations throughout the evening, evident right from the start.

The women’s voices are perhaps less well contrasted than Mayes and Wintersteller, but that’s a minor carp as Noll and Colella are such fine artists.

All have their standout numbers. Colella makes the Sally Mayes songs her own, with a nicely choreographed (by Kurt Stamm) rendition of “Miss Byrd,” concerning the secret love life of a prim secretary, and does likewise in the her second act "Back on Base" duet with Danny Weller, who comes center-stage accompanying her on bass.

There are some additions to the score if memory – and the original cast CD – reflects the show as performed at the Cherry Lane: “I’ll Get Up Tomorrow Morning,” “Dating Again,” and “There is Something in a Wedding,” being the seamless additions here.

The humorous numbers still elicit a chuckle (“She Loves Me Not,” “Three Friends,” and “There” to name a few). And the affecting ones still tug at the heart – “One of the Good Guys” (a faithful husband and father’s semi-regretful rumination on his fidelity), “If I Sing” (a son’s tribute to his father), the even more expansive paean to fatherhood, “Fathers of Fathers,” and the rueful “Life Story,” wherein a woman reflects on her choices with the hauntingly repeated phrase “…and I’m not complaining,” all movingly done by, respectively, Viviano, Dvorsky, both men in tandem with Gerle, and Noll.