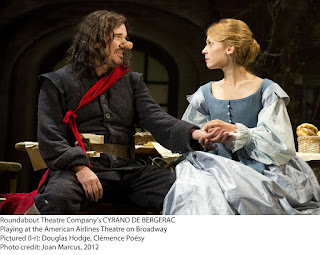 For me, the Derek Jacobi-Sinead Cusack Royal Shakespeare Company production from 1984 (London and New York) remains the gold standard of English-language productions of Rostand’s classic, far more so than Jose Ferrer’s much-lauded one, at least as the latter appears on film. I also fondly recall Christopher Plummer’s 1973 Tony and Drama Desk-winning performance in the musical version as also being at the top of the class, songs notwithstanding.

The 1990 French film version with Gerard Depardieu was magnificent, and carried an unbeatable authenticity. On holiday in Paris that same year, I caught a lavish stage production with film star Jean-Paul Belmondo. That, too, was also ideal in its way.

I wasn’t overwhelmed by the Kevin Kline production, and the absolute nadir was a modest production in England with the mild Edward Petherbridge utterly miscast.

In spite of some flaws, the present revival compares favorably with the best of those past productions.

The excellent English actor Douglas Hodge gives a mostly accomplished performance starting with his audacious entrance through theater’s 43rd Street entrance as he loudly derides the hopelessly old-fashioned actor Montfleury, though some of his words were sometimes lost as he endeavored to give vocal variety (and some of the seniors in the audience were clearly having problems).

I felt he didn’t quite nail the poignancy of his death scene. But perhaps he and director Jamie Lloyd were going for a less sentimental approach.

Lloyd directs Ranjit Bolt’s rhyming but colloquial translation with admirable vigor, if perhaps occasionally too much so at times. This is a singularly boisterous production with a lot of shouting banging around especially in Ragueneau’s pastry shop scene.

Though the stage size is relatively modest, I take my hat off to Lloyd and the production team – including set and costume designer Soutra Gilmour and lighting designer Japhy Weideman -- for offering a convincing illusion of spectacle, and all in all, an authentic spirit that, in my memory, nicely matched the verisimilitude of the Belmondo mounting.