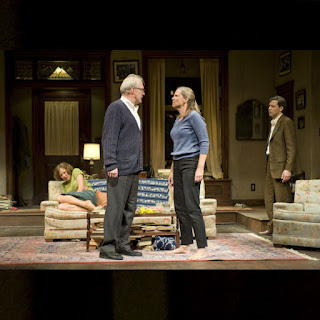 Though it may seem that we all just saw Edward Albee’s classic play of sadomasochistic marital sparring – and indeed, that fine Kathleen Turner-Bill Irwin production was a mere seven years ago – there was every reason to import Steppenwolf’s 2011 mounting.

For this is very special indeed, with four sensational performances, and revelatory direction by Pam MacKinnon. Amy Morton is, at first, less an obvious harridan than Turner, Colleen Dewhurst (who played Martha in another excellent revival opposite Ben Gazzara in 1976), Elizabeth Taylor in the film, Diana Rigg in a London revival, or originator Uta Hagen (based on the vivid three-disc set that Columbia Records issued when the play was new). But when Morton needs to show her mettle, she does. And how!

And Tracey Letts makes an almost scarily forceful George once he cuts loose, and throughout the play, he radiates a vibe of percolating danger. He’s a far less passive, browbeaten George than his predecessors in the role.

As Nick and Honey, the young couple invited over to George and Martha’s for an evening of fun and games and heavy drinking, Madison Dirks and Carrie Coon are equally fine. Dirks brilliantly conveys the opportunistic aspect of the ambitious Nick, and Coon nearly steals the play with her fine-line funny/tragic portrayal of his alcoholic, emotionally fragile wife Honey.

Though it's a long play – well over three hours, with two intervals – MacKinnon maintains a riveting pace, and the play’s final moments, with Morton particularly wrenching, have never been better staged.

This is, all around, an outstanding production of a great play.

Photo by Michael Brosilow
Print this post
Posted by Harry Forbes at 7:13 AM