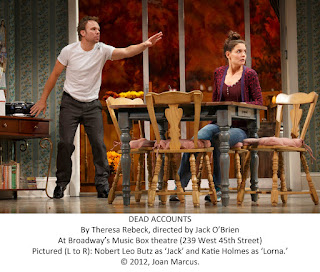 In Theresa Rebeck’s latest play, Norbert Leo Butz again proves himself a comic marvel playing New York banker Jack who returns home to his mother and sister in Ohio. Despite his fast-talking evasiveness, he is clearly concealing some mysterious shenanigans back east. Exactly what he's been up to comes out late in the show, so I shan’t spoil it here.

His co-star Katie Holmes is fine as the pragmatic 30-something sister Lorna, the sole sibling still living at home with their devout Catholic mother (Jayne Houdyshell) and ailing (offstage) father. Josh Hamilton is the sweet neighbor who’s loved Lorna since school days but never asked her out as an adult. The cast is rounded out by Judy Greer whose pivotal character appears in the second act.

Rebeck has concocted a promising setup, and for its first half, “Dead Accounts” plays as an amusing comedy of Midwest foibles. But eventually, the funny business gives way to thuddingly serious observations on the purity of Midwestern life versus the immoral, soullessness of the big city and corporate greed, a rather unremarkable – not to mention tired – theme.

Nonetheless, there are plenty of amusing and observant lines, and a couple of priceless instances of overlapping dialogue, as Lorna tries to talk on the phone, while her mother rattles on obliviously. (Houdyshell, always the pro, is a hoot, and she has some good poignant moments, too.)

Butz is a dynamo whose outrageous antics make his every moment enjoyable, from his first appearance where he blithely recounts the lengths to which he has gone to acquire his favorite ice cream after discovering the store was closed. Holmes is completely convincing in a generally self-effacing part, and Rebeck has given her two emotional outbursts that she handles with aplomb.

But for all its occasional pleasures, “Dead Accounts” is awfully thin stuff.