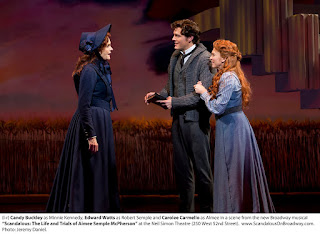 Yes, Carolee Carmello is giving an excellent, Tony-worthy performance as Hollywood evangelist Aimee Semple McPherson, although the vehicle in which she shines so brightly is hardly one of the Broadway musicals for the ages.

But credit where credit is due: composers David Pomeranz and David Friedman and lyricist, book writer, and composer of additional music Kathie Lee Gifford have given their star reasonably solid material to work with (or Carmello wouldn’t be able to “transcend” it, as she seems she is doing). Still, McPherson’s story is told way too simplistically, and the songs – on first hearing – don’t grab you as they should, either. They’re perfectly serviceable, but only generic.

The cast is certainly capable. Besides copper-headed dynamo Carmello, who manages to be as delightfully convincing as rebellious teenager as she is as confident preacher, there’s Candy Buckley as her disapproving then supportive mother, Edward Watts and Andrew Samonsky as husbands Semple and McPherson respectively, and later, as men with whom she becomes romantically involved, and at the performance reviewed, Joseph Dellger (subbing for George Hearn) as both kind father and rival preacher. Roz Ryan gets the snappiest lines as a madam turned devoted assistant Emma Jo Schaeffer.

I liked Samonsky’s smooth vocalizing in the second act “It’s Just You,” and would like to hear him in a classic show. And Watts is impressively versatile as a charming Irish preacher Robert Semple in the first act and opportunist David Hutton in the second.

But the narrative is never involving, in the way that “Chaplin,” to name a concurrent 1920s biographical musical, manages to be. And though McPherson emerges as mostly likable and sincere in her motivations, she’s not particularly empathetic in the long run. Charlie Chaplin, incidentally, makes an appearance here. It would be something if Carmello and “Chaplin” star Rob McClure turn out the big winners at awards time in the spring, which could very well might.

Walt Spangler’s unit set, an art deco homage to Aimee’s temple, is imposing and briefly impressive (rather like something out of Oz’s Emerald City), but it becomes ultimately tiresome as it dominates all the scenes. Spangler has fun with the otherwise ho-hum “Adam and Eve” and “Samson and Delilah” tableaux. (But I couldn’t help but think longingly of Ethel Merman belting out the Gershwin’s “Sam and Delilah” in “Girl Crazy” on that very same stage.) Natasha Katz’s lighting provides some variety.

The show has posted a closing for this weekend – always a sad turn when so much has gone into it – but the show’s flaws aside, you just might want to make the effort to catch it before then for Carmello’s star turn.