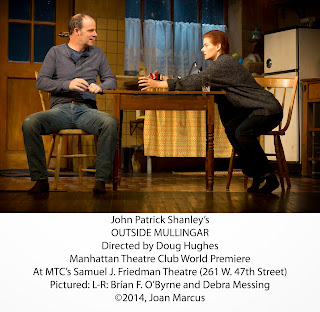 Playwright John Patrick Shanley’s first true “Irish” play turns out to be quite the charmer, thanks to its irresistible setup of two mismatched characters, a socially awkward farmer and a strong-willed chain-smoking Irish spitfire who sets her sights on him. The four endearing performances on view only enhance the glow.

Anthony Reilly (Brian F. O’Byrne) works his father Tony’s (Peter Maloney) cattle farm adjoining that of Rosemary Muldoon (Debra Messing) and her mother Aoife (Dearbhla Molloy) in the Irish Midlands. When the play opens, Aoife’s husband has just died, and we learn that neither Tony nor Aoife are not in the best of health, both predicting righly they are not long for this world.

Rosemary learns that the elder Reilly has no intention of leaving the farm to hard-working Anthony who’s devoted himself to the place all his life, but rather to an American cousin. She confesses to the older pair that she secretly loves Anthony – despite an outward grudge for his knocking her down when she was six years old -- and demands Tony leave the farm to Anthony. She declares it is fate that they should manage their properties side by side.

Her impassioned defense of Anthony sets the stage for the rest of the plot which I shan’t spoil here.

The cast is, as indicated, excellent across the board. O’Byrne is expert in this Gallic territory, of course, and plays the painfully awkward and tormented Anthony with poignancy, but the surprise is how beautifully Messing matches him. With her red hair and spot-on Irish accent, she completely inhabits her character, playing with considerable fire and conviction. Their scenes together are wonderfully modulated, as we root for the two of them to get together.

Shanley’s writing is very fine – and this is his most enjoyable play since “Doubt” (though, of course, the two works couldn’t be more different). Still, I couldn’t help feeling it could use a little fine tuning. A sickbed scene between father and son here goes on too long, and becomes a tad maudlin. Some of the bickering between Anthony and Rosemary feels protracted. Perhaps in its post-Broadway run, Shanley will be tempted to iron out the repetitive patches.

But even in its present state, “Outside Mullingar” is richly textured with fine poetic flights of fancy and some delightful twists, and certainly proves a crowd-pleaser, as the enthusiastic ovation affirmed.

Director Doug Hughes draws fine performances from all, and directs with great sensitivity, bringing out Shanley’s theme of overcoming inhibitions and opening up to the joy of love.