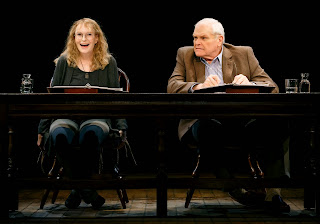 A.R. Gurney’s durable epistolary two-hander is back on Broadway with a succession of intriguing stars, including Carol Burnett, Alan Alda, Diana Rigg, and Candice Bergen among them, all taking part in limited runs, following a tradition of very big names having a go at a play that involves no memorization (as they read from scripts) and nominal movement (as they remain seated at table all evening on minimalist table and chairs set, courtesy of John Lee Beatty).

Static though the basic setup is, the story of a mostly platonic love affair in the pre-internet age, told through the letters and notes between a couple of well-to-do WASPs – flighty, unstable Melissa and the ambitious, more grounded Andrew – soon grips you in the telling, particularly when the performances are as fine as they are on this occasion.

Under Gregory Mosher’s sensitive guidance, Mia Farrow (in a welcome, if brief, return to the stage), and Brian Dennehy are quite superb, capturing every nuance of the over-the-decades correspondence, with even the silences (as when one writes to the other, and waits anxiously for a reply which doesn’t always come) speak volumes.

Farrow’s Melissa is especially extraordinary, as she shifts, over the course of the evening, from girlish self-assurance to bitterness at her parents’ divorce and new stepfather, and later, her own failed marriage, to joyful anticipation of a tryst with Andy, now a married Senator, to desperate madness when she comes to realize the relationship cannot continue. There were moments in her performance that were so breathtaking the play was elevated to the sublime.

And though Dennehy’s character is the less overtly emotional, he was no less impressive, making nary a false move throughout the evening, and matching Farrow step for step.

Though the intimate play would obviously benefit from a smaller venue, the Brooks Atkinson is reasonably intimate for a Broadway house, and the miking helps hold attention (sound design by Scott Lehrer), though I don’t believe either of the players – with their extensive stage experience – need amplification.

It will be interesting to see how the coming casts – so different in personality (though Dennehy is pairing again with Burnett) – will play these parts, but this first coupling is clearly well worth catching.

Photo: Carol Rosegg
Print this post
Posted by Harry Forbes at 8:32 AM