This Is Our Youth (Cort Theatre) 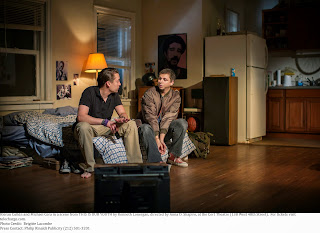 Don’t miss this splendid Steppenwolf revival of Kenneth Lonergan’s 1996 comedy/drama about disaffected if affluent youth –drug-dealing Dennis (Kieran Culkin) and aimless Warren (Michael Cera), the latter who has just been thrown out of his home by his shady lingerie-tycoon father, but not before stealing $15,000 in cash -- and pretty Jessica (Tavi Gevinson), the conflicted fashion student painfully shy Warren fancies – on the Upper West Side of 1980’s Manhattan.

Anna D. Shapiro, that most masterful director last represented on Broadway by the superb revival of “Of Mice and Men,” keeps the laughs and the aching poignancy in perfect balance, with the help of three wonderfully assured performances. Remarkably, all three of them are making memorable Broadway debuts.

But all the elements of this production are outstanding from Todd Rosenthal’s eye-popping Upper West Side apartment (interior and exterior) setting, Ann Roth’s spot-on period wardrobe, Brian MacDevitt’s nocturnal and daytime lighting, to Rob Milburn and Michael Bodeen's sound design.

Lonergan’s witty dialogue consistently sparkles, with his characters spouting outrageous pronouncements and sometimes wacky non-sequiturs. But he also gives us a profound subtext that brings out all the hurt and vulnerability beneath these characters’ sometimes outrageous antics.

Dennis' bullying of Warren patently masks profound insecurity. Warren's doltishness is just the facade of a sensitive and intelligent person. The inability of Warren and Jessica to embrace fully their obvious mutual attraction seems just a youthful fear of commitment. All this and more is beautifully conveyed in the delicate writing, nuanced performances, and impeccable pacing on view here.