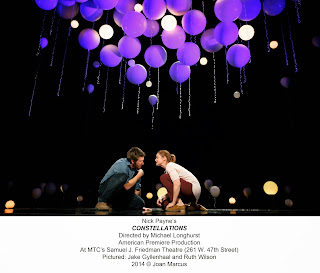 Roland’s a beekeeper. Marianne’s a quantum cosmologist at Cambridge. They meet cute at a barbeque, fall in love, break up, and come together again. And then must face a tragic hurdle. Or maybe they don’t. Or perhaps not exactly.

For, as quickly becomes apparent, playwright Nick Payne is really showing us the endless possibilities of a Multiverse, as we learn when Marianne, in an early scene, explains to the clueless Roland the difference between Relativity (i.e. “the sun, the moon, the stars”) and quantum mechanics (i.e. molecules, quarks, atoms – that sort of thing”).

She says that “at any given moment, several outcomes can co-exist simultaneously…every decision you’re ever and never made exists in an unimaginably vast ensemble of parallel universes.”

And that, more or less, is the extent of the physics, so unlike a Stoppard play where the scientific theory would be talked out endlessly in the densest of prose. But, over the course of the play’s 65 or so intermission-less minutes, we see this theory played out in 70 individual scenes (each punctuated by a blackout) where conversations (or parts of conversations) play out in different ways subtle and profound. And the effect is just as intellectually stimulating.

Stars Jake Gyllenhaal (so good in Payne’s “If There Is I Haven’t Found It Yet” in 2012 at the Roundabout), is completely convincing as an average British bloke, and Ruth Wilson is a delight in her mercurial role. They play together beautifully, and handle the tricky dialogue – scenes play out almost but not quite like the ones which preceded them – with admirable dexterity. Their timing is quite extraordinary.

The love story at the core of the play’s premise, which can also be said to be the way we experience time, is very moving indeed, so the play touches the heart as much as the mind. And the serious elements are leavened with just enough humor.

Tom Scutt’s wondrous scenic design – white balloons and light globes – suggesting the Multiverse (or perhaps a cluster of atoms) pleases the eye, and is cunningly conceived to comment on the action, as the globes change colors at key plot point, and the balloons sadly fall to the ground during some bittersweet moments.

The play’s original director at the Royal Court in 2012 – Michael Longhurst – repeats that assignment here, and paces the scenes masterfully.