Not The Messiah (He’s a Very Naughty Boy) (Carnegie Hall) 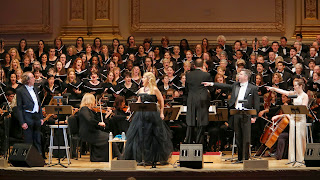 I first encountered this wacky – and musically eclectic – satirical oratorio, based on the Monty Python film, “The Life of Brian,” on a BBC radio broadcast in 2009. This performance, relayed from London’s Royal Albert Hall, was later released on DVD.

Much as I enjoyed it over the internet, Monday night’s performance at Carnegie Hall, with The Collegiate Chorale and the Orchestra of St. Luke’s (which accompanied its 2007 American premiere) made an even more persuasive case for the piece. It is not just a spoof of “The Messiah” but also a Broadway-style musical in the vein of that other Python-inspired tuner, “Spamalot.”

The story concerns an ordinary young man named Brian Cohen who, at the time of the familiar events in the New Testament, is mistaken for the Messiah by a populace eager to hail him as its savior. Reluctant though he is to accept that role, he finds himself inexorably pulled into it.

Not only did the OSL and the Chorale perform superbly, under the baton of Ted Sperling (who also directed), but a first rate collection of mostly Broadway soloists was assembled for the occasion.

These included Victoria Clark, in resplendent voice as Brian’s mother; Lauren Worsham – recently Magnolia in Sperling’s musically gorgeous “Show Boat” with the New York Philharmonic – as his girlfriend Judith; strong-voiced Marc Kudisch in myriad roles; and sweet-voiced clarion tenor William Ferguson reprising his Albert Hall performance as a wonderfully apt Brian. Idle, who self-deprecatingly describes himself as “baritone-ish” in the program, was funny in his spoken bits, and put across his songs with the engaging panache of a British music hall singer of the first rank, as when he led to cast in “Always Look at the Bright Side of Life.”

The principals all sang with beautiful tone, and just the right sense of parody when required. And, oh yes, there were four bagpipers from the New York Metro Pipe Band who, together with some singing sheep, added a further zany touch to the proceedings.

Idle’s amusing book and lyrics were set to John Du Prez’s music which, at times, was quite beautiful. “When They Grow Up” and “The Final Song” were but two examples of affecting songs that worked outside the satirical framework.

With pastiche songs of every sort – from gospel, Broadway, doo-wop, mariachi, Gilbert & Sullivan, and of course, Handel (“We Love Sheep”) – the 90 minute show moves along at a fast pace with little dialogue, and mostly linking recitative. The Collegiate Chorale and the OSL sang and played with as much fine musicianship as if the piece really were Handel.

There were a few curious walkouts during the first act, but it was difficult to say whether those might have been offended from a sacrilegious perspective (though, unlike its film source, the satire here is more musically and politically targeted), or simply found the Python-esque humor sophomoric. But everyone else seemed to have a rollicking good time, and left the hall in bracingly high spirits.

Photo by Erin Baiano
Print this post
Posted by Harry Forbes at 4:20 PM