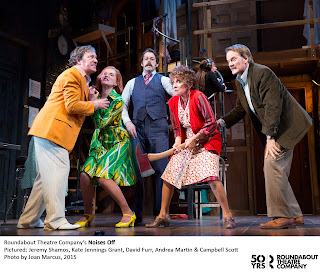 This is an absolutely first-rate revival of Michael Frayn’s riotously funny (when it’s done right, that is) 1982 farce about actors putting on a farce in provincial England wherein everything that can do wrong does.

I first saw “Noises Off” in its original London production with the fabulous Patricia Routledge heading a spot-on cast -- and it straightaway topped my personal list of funniest shows ever seen. Subsequent all-star revivals in London and on Broadway never quite lived up to the peerless original, and certainly Peter Bogdanovich’s Americanized film with the likes of Carol Burnett, Christopher Reeve, and John Ritter fell disappointingly flat.

So I’m happy to report that the Roundabout’s latest revival is a side-splitting winner all the way, with each of the nine principals proving adept farceurs, and British director Jeremy Herrin – last represented on Broadway with the vastly different and decidedly uncomical “Wolf Hall” -- expertly putting them through their well-timed paces.

The first act shows the final dress rehearsal where it’s clear things will go wrong, the second act gives us the backstage view as romantic complications among the staff and other emotional issues threaten to derail the show, and the third act is the by now truly disastrous final performance months later.

Andrea Martin, in top comic form, is the befuddled Dotty who can’t quite to master her props, be it the all-important sardines or the phone, and whose liaison with another member of the company causes second act chaos. Campbell Scott is the weary director whose own romantic escapades threaten to undermine the production; David Furr, the hilariously inarticulate leading man; Jeremy Shamos, the nose-bleed prone Frederick; Megan Hilty the sexy resolutely unflappable novice; Daniel Davis, the old-timer with a worrisome penchant for the bottle; Rob McClure, the physically exhausted stage manager (and sometime understudy); and Tracee Chimo, the lovelorn assistant stage manager. All are terrific, and go for the emotional truth behind the belly laughs. They all play English most convincingly, too.

Genuine farce of the British variety has strangely never gone over well here, but Frayn’s evergreen is in a class by itself and proves again a surefire audience pleaser.